It's the middle of June and I've posted only 3 times so far this month. This makes 4. How sad is that? When the end of the year comes around and I start working on my blog book for 2012, I'll only have myself to blame for how THIN it is.

Tomorrow is the last day of school for both my kids. Neither one of us is invited to whatever end-of-school ceremonies they are having. Those days are over. We are officially parental persona non grata. Personas non grata? Persona non gratas? Whatever, we're not wanted. Since we both have to work, and have tons to do which would make ditching work for a couple of hours in the middle of the day difficult, it's perfectly fine, actually. Ask me if I miss the lower elementary and dagis days when we had to sit through an eternal ceremony that usually involved several songs from every single grade in the school.

Seen on the highway today: an armored military tank lumbering along with its blinkers on and an övningskör** sign on the back.

What with all the leaves and grasses and greenery that has exploded into summertime around here, I actually found myself feeling CLAUSTROPHOBIC because of the high grasses along the road into Flyinge the other day. I've never had that reaction before; it was very weird.

I went to the mall twice in two days: an unheard of activity for yours truly. I usually only go to the mall if I have something specific to get, like a birthday present for someone. But I needed to replace the shoes that I bought last week that turned out to be too small, and while I was there, I figured I might as well pick up a new pair of walking shoes and then I bought a pair of pretty chocolate & copper strappy sandals and then I bought 2 tops, one of which will go with the red pants...because it has an American flag on it. Drrrr.

Hey! Did I tell you that the farmhouse behind us is no more? 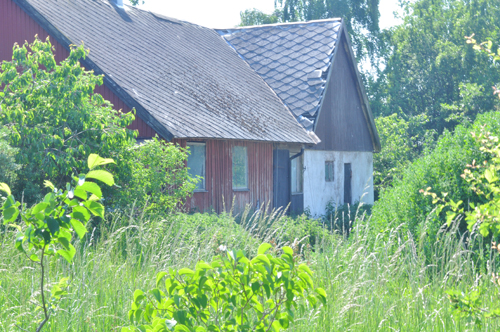 It's been quietly falling to pieces for several years and the young couple who bought it about 2 years back kept getting stymied in their plans to rebuild it, mostly because they wanted to re-do the stable and none of the neighbors on our side approved the plans. In Sweden, when you are building you have to get permission not only from the county, but from your neighbors as well for many of the additions you might want to add...like a chimney, for example and certainly a stable. And a stable means horses which means manure which means flies. And since the elderly lady who owned the farmhouse when our neighborhood was first built 10 years ago had 3 horses and a gazillion dogs and another gazillion ducks, and didn't take care of the manure properly, we had flies up the wazoo. So we kept saying NO to any plans that the county sent our way.

But apparently they finally pushed their desired building plans through and a few months ago, when I came home from work the farmhouse was GONE. Bulldozed during the day and the house was halfway demolished to boot. There had been workers crawling all over the roof a couple of weeks previously removing roof tiles and we assumed they were re-roofing, but they were removing them completely (they have to be recycled) to preparation for razing the dump.

They have already laid the foundations for the new house, and it will be interesting to see it take shape. I won't mind a horse or two in the pasture behind us again...I liked having them out back being all horsey and picturesque...as long as the flies don't become a menace.

Martin JUST got home, at 10:30 p.m., from school, where he was, with the rest of the 8th graders, serving dinner to the 9th graders who are leaving BMSL for the glories of high school (gymnasium). And apparently we ARE invited to the end-of-school ceremony for his class tomorrow, so now I have to figure out how to ditch work after all.