We flew into Stansted and took the train to Leighton Buzzard, where we spent the night before picking up our longboat the next day. After dropping off our suitcases in the shipyard, we walked back into town and hit the Tesco for groceries, enough to supply breakfasts and a couple of other meals for the week on the boat. We didn't see much of Leighton Buzzard, just walked around a little bit, and spent a pleasant hour in the church of All Saints which had a lovely old cemetery huddled within the close. When I looked up Leighton Buzzard on Wikipedia to find out more about the town, one of the notable facts about it was that one-hit wonder Kajagoogoo hails from there. Hush hush! haha!

The Wyvern Shipping Company where we rented our boat was professional and pleasant and their boats were lined up against the bank 3 deep. We put our luggage on board the Primrose and then our guide/instructor Steve came and walked us through everything we would need to know for the week: basic engine maintenance, how to flush the toilet, how long our water supply would last, how to start the boat, etc., and then he cruised up the canal with us and showed us how to operate the first lock. It was exciting and kind of scary to think we had charge of a BOAT for a whole week. There were other people already at the lock, so we didn't really do anything but watch, but we knew we'd get a workout before too long as there are plenty of locks along the length of the Grand Union Canal.

Captain Anders at the tiller. Note the Swedish flag! 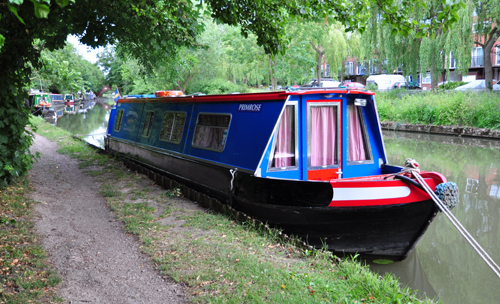 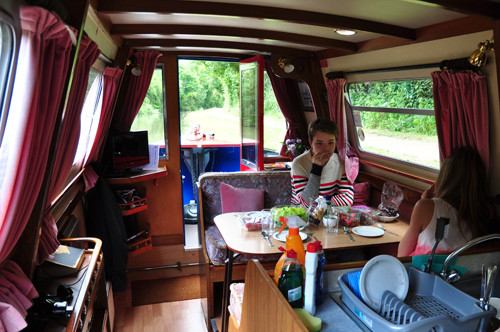 The boats are truly narrow and two can pass on the canal, even when there are boats tied up on either side. We had sleeping accommodations for 4 people, adequate if not luxurious: 2 bunks and a double bed after lowering the dining table and flattening the cushions. The first night Anders and I slept in the main cabin, though "slept" is not really the word...too narrow to get comfortable and somewhere in the cabin was a ticking clock that drove me crazy and woke me up constantly. I found the damn thing the next morning and though I wasn't allowed to smash it with a hammer, I was able to stuff it into a drawer which was enough to muffle the noise.

A lot of people apparently live on the canal year-round or at least during the warmer months. Some boats were really small, obviously one-person boats; others were even longer and much more fancy than ours. There were a lot of birds on the water: swans, ducks and moor hens mostly, many with youngsters paddling after them. We saw cranes and herons as well. 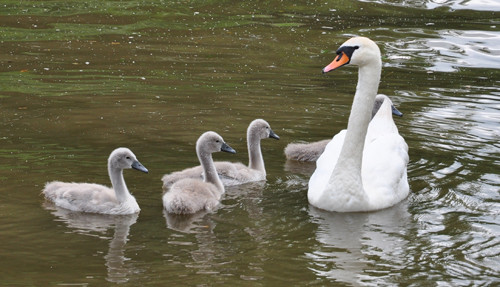 Two-way traffic on the canal 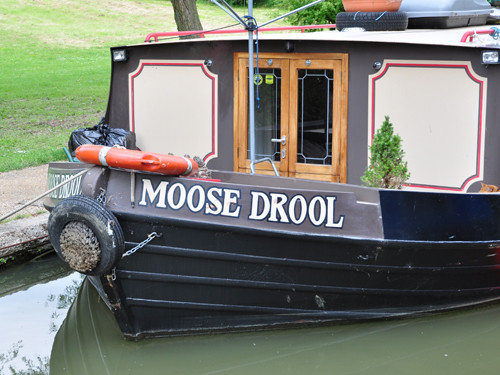 Boaters after my own heart!

All the bridges and locks along the canal are numbered, making it quite easy to navigate with the help of the map which shows all the corresponding numbers. Every bridge was different but the locks were all essentially the same, except for one set that had a swing bridge in the middle of it that we also had to maneuver out of the way. As well as bridges to go under and locks to go through, there were also a couple of aqueducts to go over, though they weren't very exciting, except for the one that had the edge nearly level with the water! 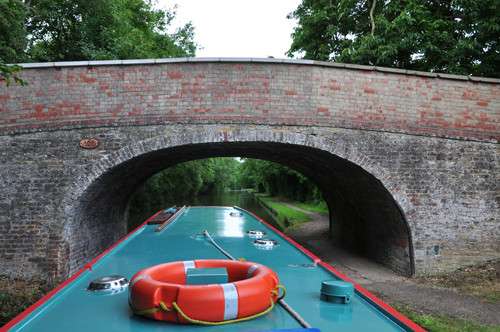 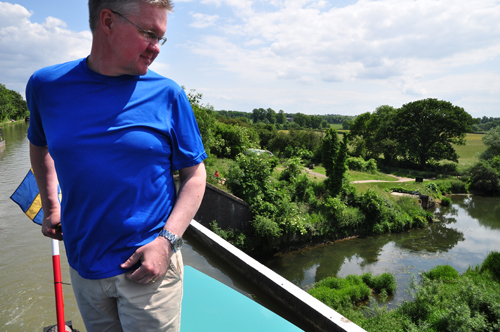 Anders took care of the steering for the most part, though we all took a try at it. I thought it was hard and kind of scary, and Karin and I both felt we just veered back and forth across the canal when we were driving, though she got better at it. 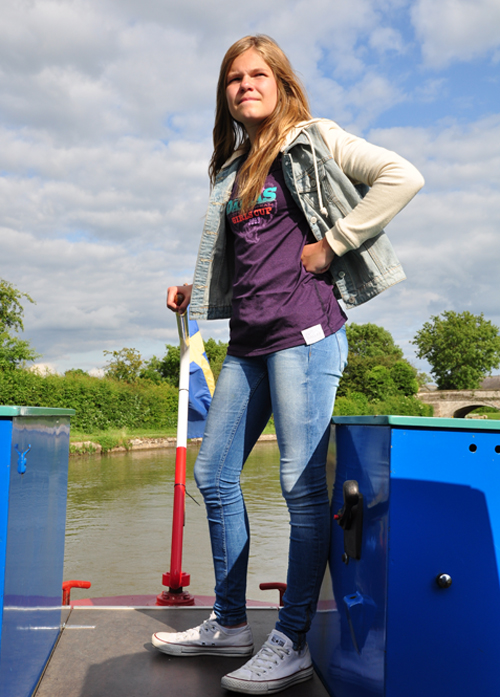 It was very peaceful and quiet along the water. There was always a towpath along one side, where we could moor up at any time. The other side was often overgrown or private property. Once there would have been towpaths along both sides for horses, but of course that's no longer necessary. Whenever we passed moored boats we had to decrease our already slow speed to nearly nothing; you were never allowed to have a breaking wake at all, so it was quite a leisurely process. I hung out at the front or back of the boat, reading or listening to music mostly, while the kids spent more time lounging in the cabin. We stopped and filled up the water tanks at marked water points every other day...giving us drinkable tap water and even hot water for dishwashing and the tiny little shower onboard.

The most exciting part was the locks. Sometimes there was only one, but we had a set of 3 to get through soon after we set off and a set of SEVEN further up the canal. They were a lot of work! Anders would steer the boat to the mooring points before the lock and we would all jump out and head up (or down) the hill to the lock gates. Each lock is an enclosed space that lets water in and out to move boats up or down the canal, like stairs. What you did first depended on which way you were going and what state the lock was in, whether it was empty or full, and which of those was even with your current level. 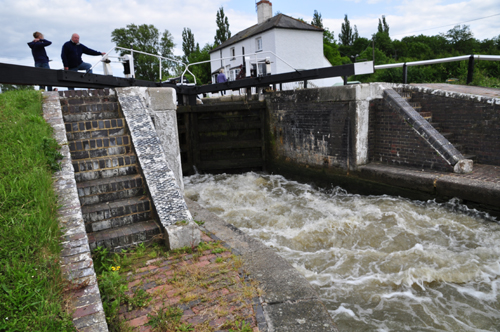 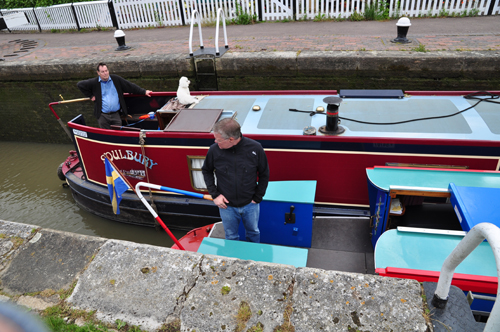 When there were two boats in the lock, it was easier, but when it was only our boat, someone had to hold the center line to keep the boat secure to the side, so she wouldn't bounce around in the lock as it filled. 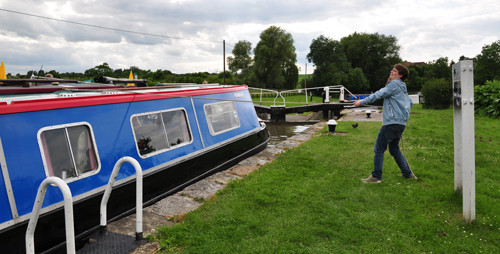 Martin makes a big deal out of holding the center line

For each lock, gates had to be opened (or closed) and paddles had to be cranked open. Once the lock was filled or emptied, the gates had to opened to allow the boat in or out and then closed again. The gates were operated by huge heavy wooden or stone "handles" that it took all your weight to move. The cranks were operated with a windlass and there were usually two sets of them, depending on which gate you were at. Usually Martin and Karin would set up station on either side of the lock and deal with the paddles and the gates while I held the center line. They got very good and quick about opening and closing everything! 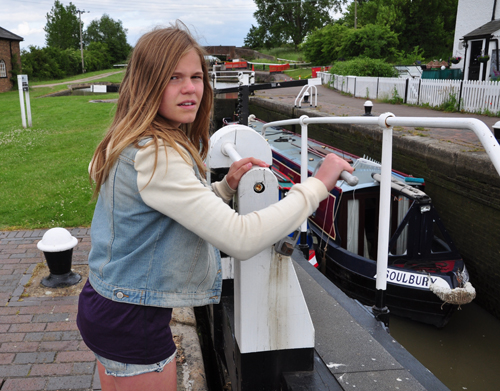 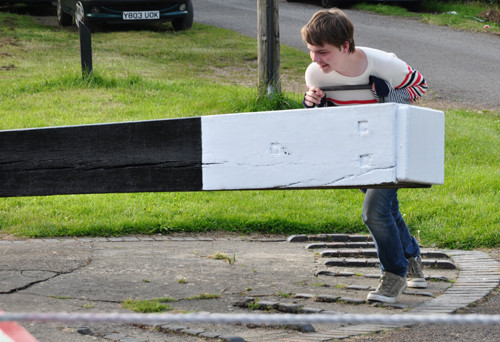 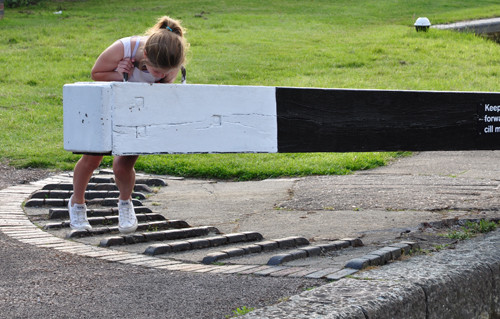 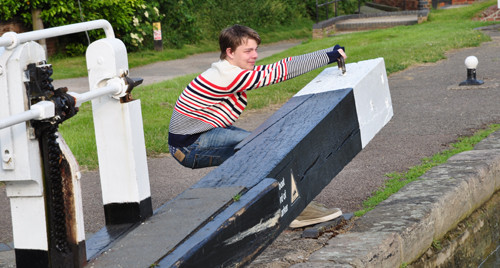 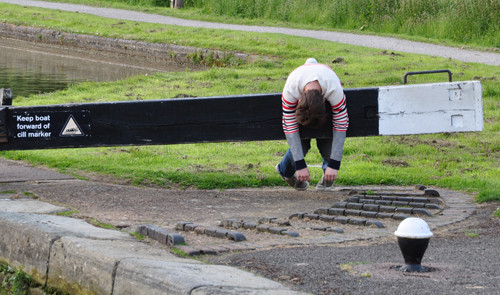 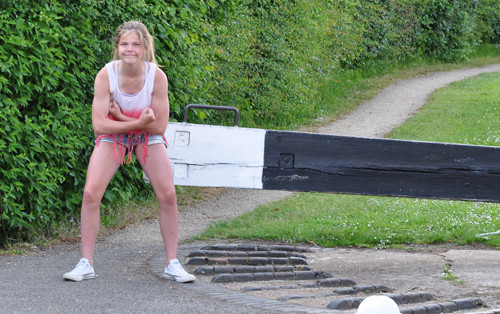 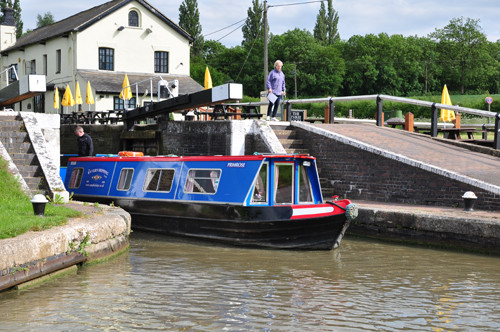 Altogether, during our trip up and down the canal, we passed through 20 locks! It was fast and easy with 4 of us to handle everything. I was impressed by the 2 older ladies we met who were each going through on their OWN respective boats! They told us they had earned their chips and glass of wine each evening :)

At the height of our journey, we headed through the nearly 2-mile long Blisworth tunnel, which was originally started in 1793 but finally opened in 1805 after it had collapsed 3 years into construction. It was pitch black except for our spotlight at the front of the boat and dripping water from the ceiling. Occasionally we passed giant ventilation holes in the ceiling but mostly all one could see was brickwork and the shining spotlights of oncoming boats. 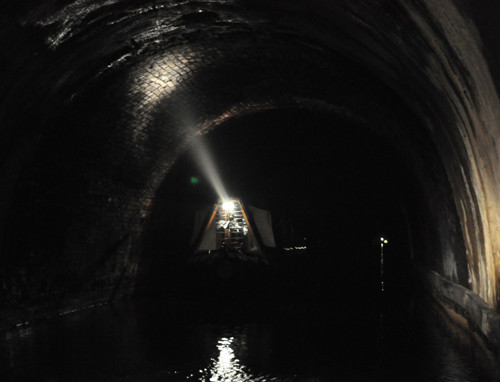 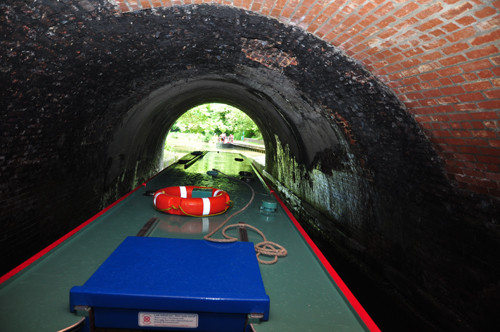 After exiting the tunnel, Anders turned the boat around and we headed back downstream in order to get back to our starting point by Friday morning. We stopped in the pretty canal-side village of Stoke Bruerne and visited the Canal Museum, where I was interested to learn about leggers, men who "walked" the boats through the tunnel by lying on planks sticking out from the side and pushing the boats along with their feet against the tunnel walls. Click here for a photo of leggers!

We were also happy to see the candy boat moored just north of the village where we bought toffees and licorice and strawberry balls, along with yummy little rhubarb and custard hard candies. 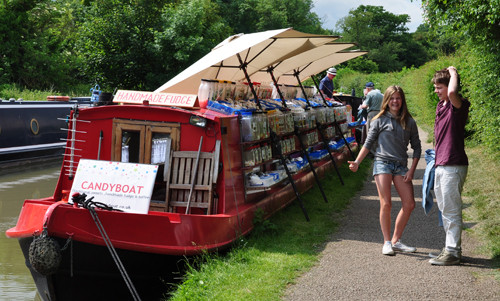 We stopped along the way at various pubs and restaurants for dinner, and enjoyed the usual English pub fare (as well as the free Wi-fi when we could get it, which wasn't often). Evenings were quite cozy, listening to the water lap at the sides of the canal as boats passed us after we had moored for the night and returned to the boat for myskväll. 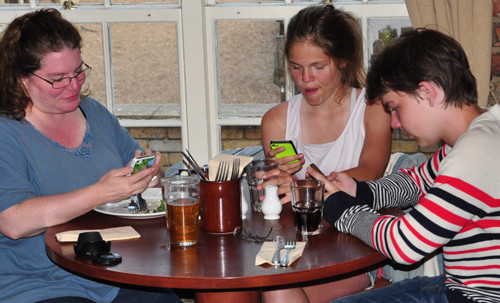 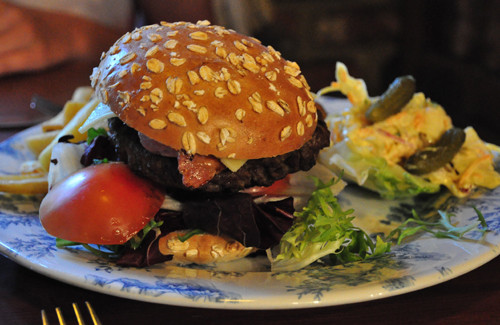 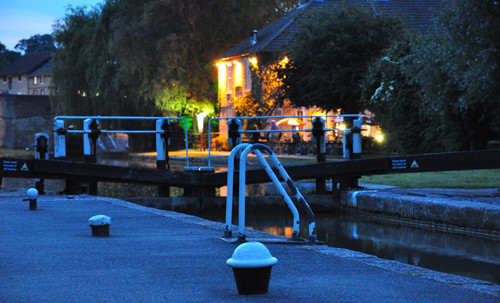 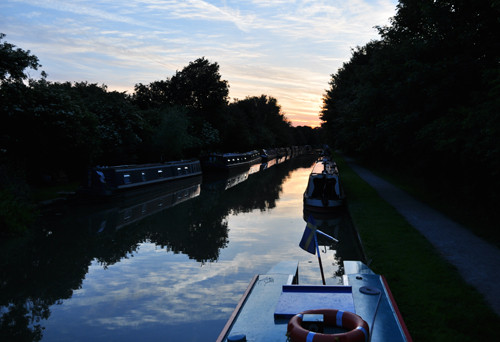 Apart from the locks, the only other real excitement was caused by the boat that RAMMED US. Karin was actually at the tiller, though she apparently leapt down into the cabin as soon as it happened, abandoning her post to her dad. Martin and I were in the main cabin and had no idea what had happened; just a huge BANG and shake and then grinding noise as the other boat scraped along our bow. We had just started under a narrow bridge when they hit us. They hadn't sounded the horn and they were on the wrong side to boot. Anders said they didn't look very sober either when we finally got straightened out and passed each other. Our boat was scratched and two glasses on the table fell off and broke, but nothing more serious than that, thank goodness.

The afternoon after we came out of the tunnel and headed back downstream the clouds closed in and it started raining. A steady downpour all the way through the night and into the next morning when we dropped the boat off. It was fun while the sun was shining but I can't imagine hanging out on the canal during inclement weather.

All in all, it was fun and definitely worth the money, but I will be really, really glad when I get my land legs completely back and the swaying sensation in my head is gone for good. :)
Collapse