It's hard to remember the details this far forward, but I remember how I cried when the ultrasound technician confirmed that our second child was a girl. I was so glad that I wouldn't have to consider being pregnant again, since we'd have one of each which is what we both wanted. Of course, then Karin arrived and was the biggest tomboy ever born, so all I could think was "be careful what you wish for", haha!

Neither of my kids wanted to actually leave the womb, and despite being three days early, a welcome change from her big brother being three weeks LATE 19 months earlier, the whole birth experience was pretty traumatic again, since I was talked out of having a C-section and then when she wouldn't budge, ended up with one anyway. I can remember green scrubs and the huge silver satellite dish above my head as I lay on the operating table in which I could see reflected EVERYTHING despite the curtain shield the nurses had hung to block my view of the surgery, and Anders holding tight to my hand.

It HURT. I could feel...well, not everything, but way more than I thought I should be feeling and I remember starting to panic and the nurses and Anders both trying to reassure me. It hurt and there was pressure and I kept trying not to look in the reflection above me. And then she was out and everything is a blur after that.

C-section babies, I think, look so nice after they're cleaned up...they don't get that red, squashed look that babies born naturally can have. Our baby girl was so BEAUTIFUL.

And I was able to dress her in pink and dresses and little girly outfits for almost 2 years until her already dominant personality put its foot down and it was all cowboy-racecardriver-pirate-ninja-bionicle-soccer-boyboyboy clothes for years until just recently. The thing about Karin is that she never stops going. She's a bundle of constant energy and hilarity, bouncing off the walls and ceiling and pulling such funny faces that you can't help but laugh. We've been laughing for 14 years now; she brings such joy into our lives. Joy and drama and frustration and heartache and love. Everything a little girl, suddenly so close to being a woman, can bring.

I can't get videos to embed here on my Livejournal for some stupid reason, but if you click here, you'll see a video of Karin's portrait photos from birth until last fall.

This afternoon we put her on the train, along with the rest of her soccer team, who are now up in Gothenburg for a week at the Gothia World Youth Soccer Cup. It's the second week this year she's spent away from home, and I can see the frequency as well as the desire to be out on her own increasing, much to my (secret) dismay.

She's not quite all grown-up though, despite so much evidence to the contrary. She still wants to cuddle and be tickled, and behave as much like a teenager as possible, and after all, she's entitled. She's a funny, silly, smart, beautiful, strong, sporty, energetic, thoughtful, tender-hearted, curious, quick and fantastic kid. Happy birthday, Karin Linnéa Ek, I love you! 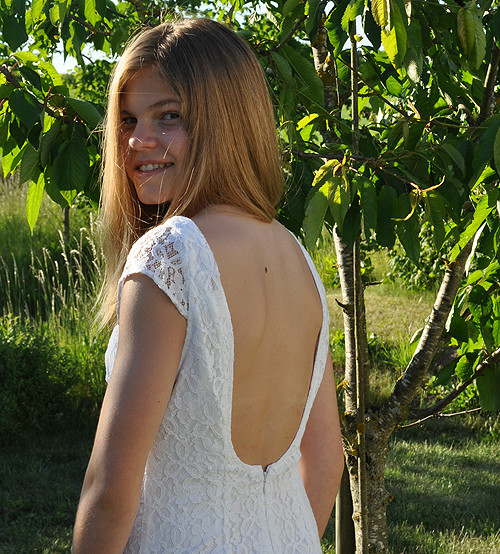