Goodness, time gets away from me the second I start working again. I made it through my first week of work after 3 weeks off, but I need to post about the rest of our trip so I can move forward. :)

We took the train from Covent Garden out to Watford Junction (which, incidentally, is close to where my UK office is), which took several changes and a very long time. From there, we took the a shuttle to the Warner Brothers Studio, where the Making of Harry Potter tour holds court. The bus was covered an a giant Harry Potter image and music from the soundtrack was playing for the 20 minute-ride. The bus was packed full, even though it was nearly six p.m., the time at which our ticketed tour was for. 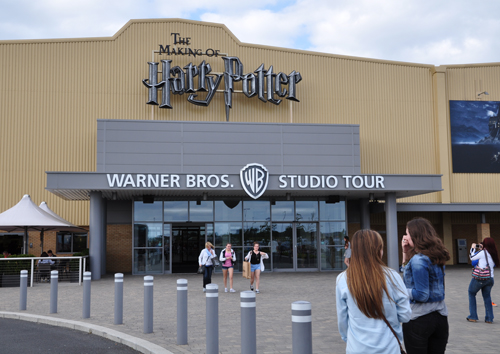 In the huge lobby, photos of the cast (at various ages) smiled (or in Voldemort's and Snape's case, glared) down at us. We took our tickets and got in the short line to begin the tour.

I'll be honest, I can take or leave Harry Potter. I only ever read the first three books, at which point I gave up in disgust, because geez louise, that woman needed a stricter editor, and I've never gotten around to reading the rest. I HAVE seen all the movies, but only once. I like them well enough and I admire all the work and love that obviously went into them. That said, the 3.5 hours we spent inside the studio were the best part of our whole trip: definitely worth every penny.

First, we followed our guide into a small room with screens showing posters from the films around the world while he told us a bit about how our tour would proceed. He told us that the longest time anyone had ever spent on the tour was a honeymooning couple who were there for TWELVE hours, and that we could stay in each section as long as wished. Then we went into a theater and watched a short film presented by Hermione, Harry and Ron about what we were about to see and the film closed on a scene of the doors to Hogwarts. The movie screen then slid up to reveal the ACTUAL doors to Hogwarts, which opened slowly. 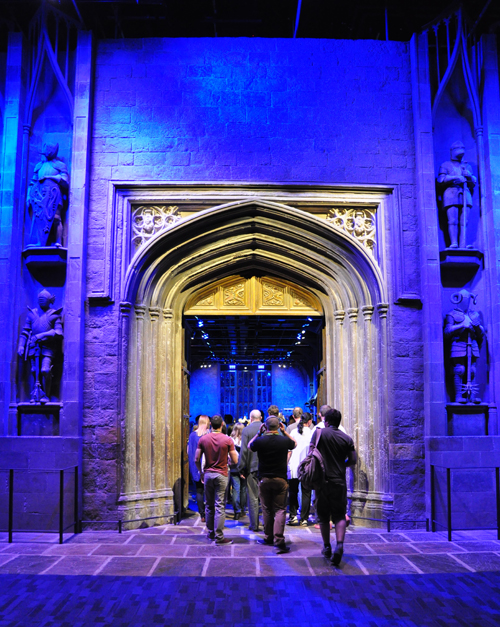 We walked slowly into the great hall of Hogwarts. The entire great hall, minus the ceiling which was generated with CG in post-production. Along the walls, here and there, were manniquins wearing various costumes from the films. The attention to detail everywhere was astounding. 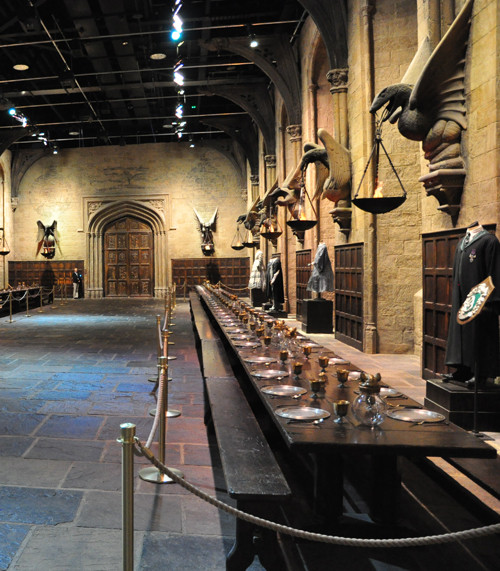 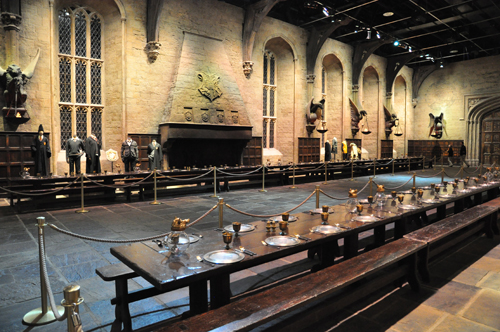 After the Great Hall, we walked into a huge hanger that had more sets and movie props. The boys dormitory and Gryffindor common room, the entire potions classroom, Dumbledore's office, Delores Umbridge's office (complete with kitten plates), the Weasley's home, Hagrid's Hut, the Magic is Might statue from the Ministry of Magic and more. It was truly incredible. 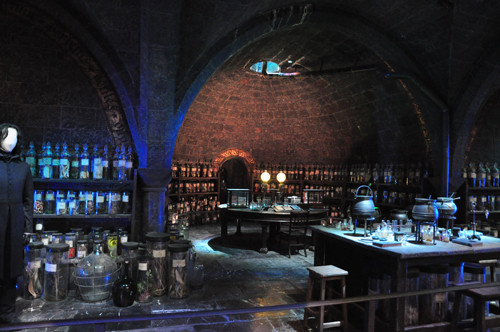 There were lots more manniquins wearing costumes, screens showing little film clips about the different sets and props, placards explaining what you were looking at and almost too much to take in. There were flying cars and quidditch brooms, the leaky cauldron, the interlocking door from Gringott's, wands, a huge "miniature" of the Hogwarts Great Hall ceiling, the gates with the stone boars on top...it felt like we could have spent DAYS in there looking at things. 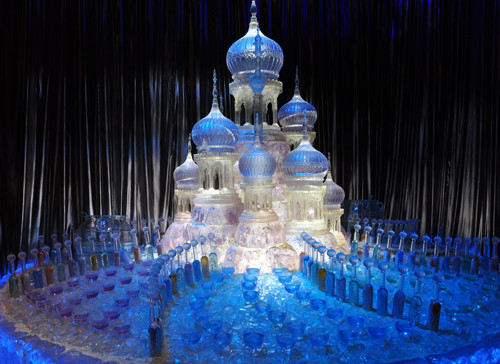 The next part of the tour was outside in the backlot. Luckily for us, it was a lovely day, AND since it was near the end of the day, the group was quite small because the first thing we saw was the kiosk selling butterbeer! I have wanted to taste butterbeer since I heard about how good it was at Harry Potter World in Florida. It was pretty pricey, but we all got a mug and agreed it was fantastic: a creamy smooth butterscotchy caramel drink. The only bummer was the incredibly nasty aftertaste that kicked in about half an hour later, which led me to believe that it has the same sweetener as Diet Coke, since I get the same aftertaste from that. Oh well, it was good going down!

Outside in the backlot, after the butterbeer high had worn off, we walked past and admired Privet Lane (2 houses worth), Tom Riddle's grave, the Knight Bus, the flying car, part of the covered bridge, Harry's parent's cottage and some of the giant chess pieces from the first movie. Then it was into the Creature Workshop, where all of the masks, wigs, prosthetics, animals and creatures and beings from the film were on display along with documentary films starring Warwick Davis explaining what we were looking at. Even Dobby was there! For some reason, neither Anders nor I took any photos in that part, probably because it was too fascinating to stop!

Upon leaving the creature workshop (and several minutes spent staring at the animatronic griffin), we turned the corner into Diagon Alley. Again, the ENTIRE Diagon Alley! You could walk up the street and peer in all the shop windows (though, sadly you couldn't go in and buy things). 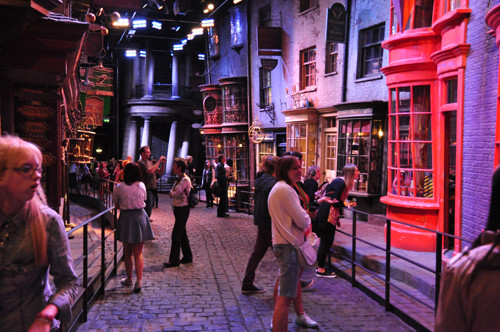 If you want to experience a bit of what it was like, you can visit Diagon Alley yourself, courtesy of Google Streetview!! Check it out!

The next huge section contained the artwork: models, drawings, architectural schematics, statues and concept paintings...I was in heaven. What a lot of incredibly elaborate creativity and talent goes into movies like this! I took several photos here, but alas, all of them but two were lost in the photo deletion fiasco. :(

We followed a ramp that led us past a statue of the founder of Hogwarts, past a giant display case filled with paper and wood models of sets and turned the corner into another huge room, where every single person gasped upon entering. It was completely filled with a huge perfectly-to-scale model of Hogwarts. Lights twinkled in some of the windows and here and there they MOVED, making you think there were tiny people walking along inside the corridors and passageways. A carpeted ramp went around the perimeter and along it were several screen stations where you could click and zoom in and get more information about the various sections and parts of the castle as well as watch a time-lapse film of its construction. Magical! The photos truly don't do it justice. 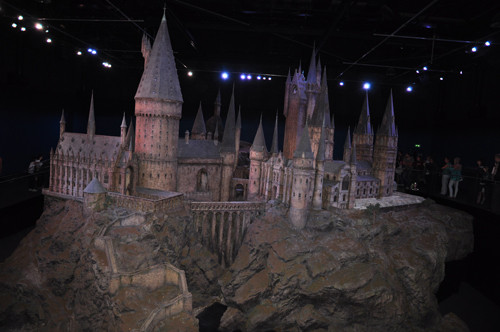 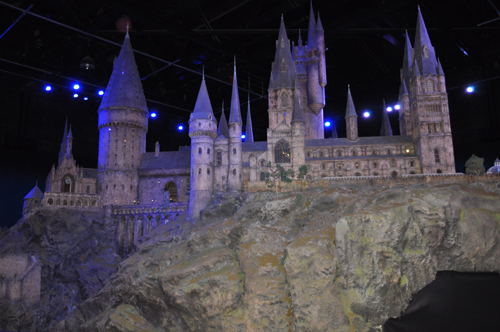 After leaving the castle model you pass through a room that is floor-to-ceiling shelves filled with the wand boxes from Ollivanders in Diagon Alley. Over 17,000 of the boxes were made for the films, though apparently "only" about 3000 or so wands were originally made. Each of them is labeled with the names of all the cast and crew that worked on the films. The kids spent several minutes there and managed to find Daniell Radcliffe, Emma Watson, Rupert Grint and J.K. Rowling's wand boxes.

And finally, after all that, when everyone was completely awed and saturated with movie magic, the tour dumps you out into the biggest gift store I have EVER seen, including all the Disney resorts put together. It was another hangar FULL of HP paraphenalia. Anything and everything Harry Potter. We actually managed to make it through, despite all the oohing and aahing over everything by the kids (you can buy your own wand!), with only the illustrated guidebook that we had pre-paid for when we bought the tickets. If they had had a coffee table book of the concept artwork and architectural drawings I would have totally sprung for that, but alas, no such thing has been published.

28 things you will learn about the Harry Potter movies during the tour.

Whew! That was long and I still have one more day to cover!

The next morning we decided it was time to see something historical. We headed for the Tower of London, and took the Yeoman Warder's guided tour. The Yeoman Warders, or Beefeaters, as they were nicknamed in the Middle Ages, conduct hour-long tours filled with facts, stories, anecdotes and jokes. 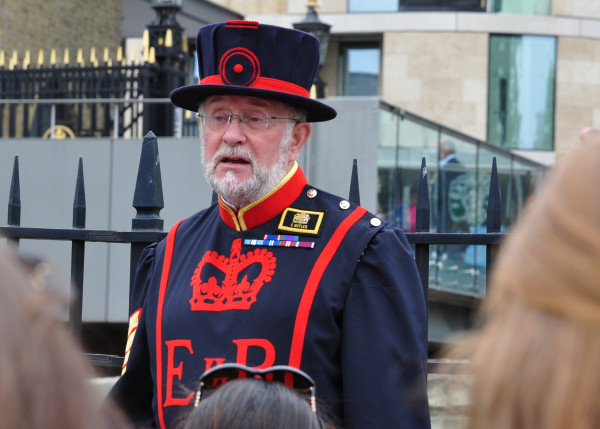 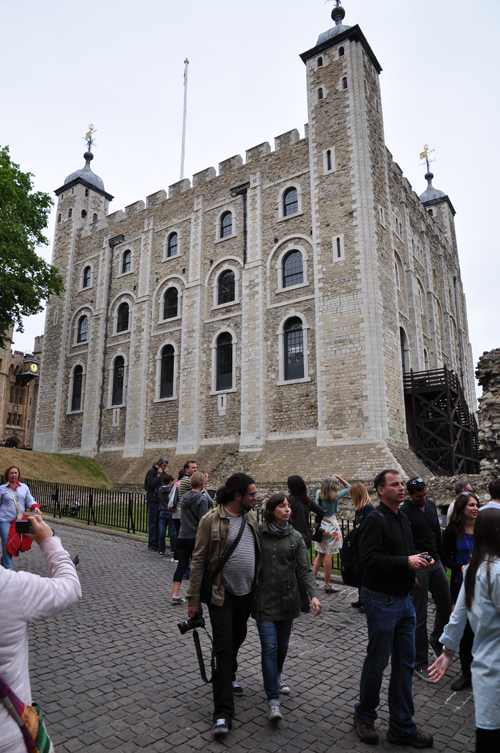 Built in 1078 by William the Conqueror, it's still intact today and is the structure that gives the entire castle its name.

We waiting in the million-mile line to see the Crown Jewels which at least moved quickly. They were very sparkly, but over too fast. At that point the weather turned on us a bit. It had clouded up and it started raining. The crowds were so dense at the Tower that waiting in more lines to see more things within it wasn't very appealing and we headed out. Anders wanted to go up into the Tower Bridge, but the kids really wanted to go to Oxford Street so I headed there with them. 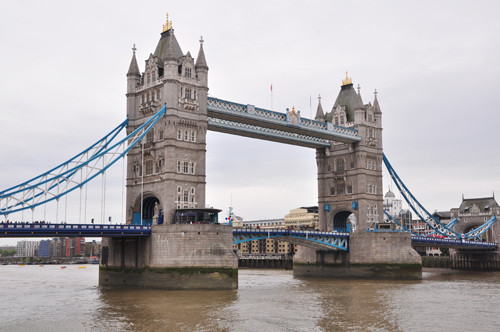 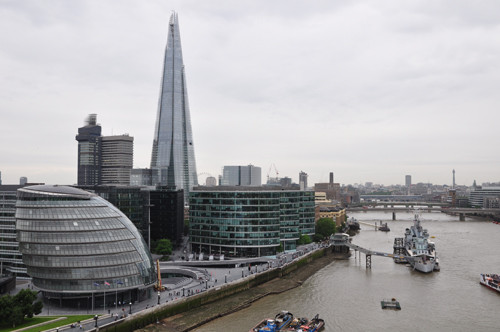 I was to regret it, after leaving them in Primark, and walking half the length of Oxford Street to Waterstone's Books with the admonishment that we would meet back at Primark at 5:30. I finished browsing early and headed back only to find out that they weren't there anymore. I met up with Anders and we hiked the entire length of Oxford Street again to the end to catch up with the kids and pay for their purchases, and then walked half of it again to find a sushi restaurant. Thankfully, the sushi was fantastic (if the most expensive we've EVER eaten) and my feet stopped hurting enough for us to make our way back to the guesthouse.

And the next day, we flew home. All in all, an excellent family vacation. I wonder how many more years we will actually get to have family vacations like this? Martin is soon 16 and Karin is now 14...it is hard to imagine that vacations won't alway be the four of us.
Collapse