The weekend is half over and I am going to need another day, at least, to recuperate from it and the previous week.

The kickoff performance went great, despite a last-minute panic when one of our team members didn't show up. He was there during the day, for all the presentations, but after we wrapped that up and left to go to the place where we were having the evening activities, something happened and he had to leave, and never made it back. So we were left without our Uncle Sam. :(

Luckily, someone had the bright idea to ask the head of Corporate Marketing if he would stand in... not to dance or sing, just to wear the costume and stand by the stage and point at the audience once in a while. He was totally up for it, so we managed to pull it off and even if I say so myself, blew everyone else away.

Alas, we were robbed. The Eastern Europe team also did a fantastic job, and THEY got called up for an encore...at which point we knew we were screwed. We came in second, though. 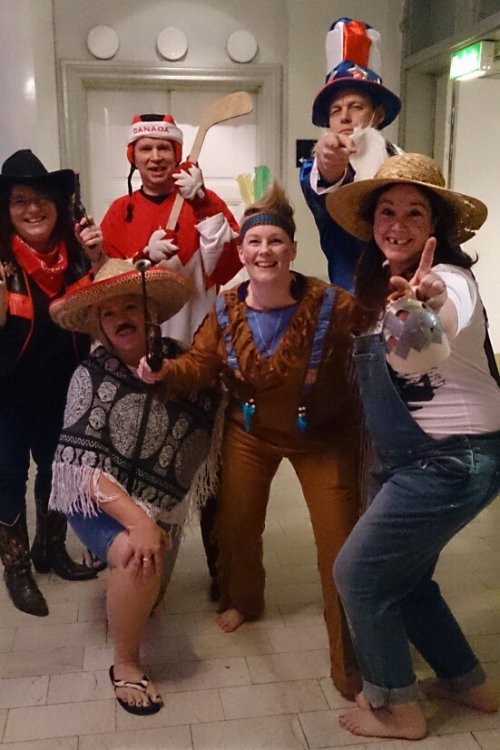 I look weirdly foreshortened in that photo but it's because I'm leaning forward. Aren't those cowboy boots the bomb? They were awful to dance in, I can tell you. I had a mustache as well, when we performed but it fell off right afterward. :D

Yesterday, I managed to leave work at 2:45 and screamed home to finish the preparations for the Jewelry Swap/Shop that was started at 6 p.m. Sadly, there were several people who bailed at the last minute for various reasons, so we ended up being 11 people instead of the 16 I had expected but it turned out to be the perfect number. I think now if we'd had 16 it would have been too much and too chaotic. It helped that several of the people who came are VERY social and talkative and everyone had a great time.

I made zucchini soup which turned out GREAT and Anders was a darling dear and made chili to my specifications the evening before, so all I had to do was heat it up and add the bell peppers (red/orange/yellow). I served it with grated cheese and crème fraîche, and had bread and butter for the soup. For dessert I made a caramel cake and 2 people also brought some sweet things to share. Everyone raved about the food and the evening, which was really gratifying :)

I had cleared off the dining room table, and we brought in the porch table and 2 other small ones so we had plenty of space for everyone to display their wares. I was so busy I didn't take ANY photos, though: drrr. Most people were just trying to get rid of stuff so no one wanted money for anything. Some of us swapped but there was a lot of just giving things away or paying a minimal price like a dollar. I scored some really nice pieces and got rid of a lot of my own old junk, which made me happy.

In addition to a pile of faux Pandora beads, I got a beautiful heavy gold necklace that almost exactly matches a bracelet I bought in St. Thomas back in 1992, another couple of necklaces, a glittery cuff band, several bangle bracelets and a "silver" ring stack (which turned my finger green tonight, haha!), all for nearly nothing! I think I paid a total of 50 kronor, plus the 20 kronor I lent to Karin to buy a couple of things as well. Most of what I got was free or swapped. Score!

Karin's gang of girlfriends arrived before we were done, which worked out perfectly because we told them to go check out the jewelry too and take whatever they wanted, so that was an extra 9 people who helped us thin our piles down. So, all in all, a perfect evening! I can highly recommend throwing an event like this. There was so much interest that we'll probably do it again, though I may see if I can get someone else to host. And maybe do an after-work at work version as well. In addition, someone suggested doing an accessories swap evening: same idea but with purses, scarves, belts, etc. I think that might be fun, too!

Tonight we went out to dinner to celebrate my sister-in-law's big birthday, and now all of us adults are officially over the hill, and extremely full from a very good dinner, to boot.

I am very very glad that I have NO plans tomorrow and can totally relax and veg out. Next up: Wonders on Friday and the start of Melodifestivalen on Saturday!
Collapse