It's been a very relaxing long holiday weekend here in Flyinge. Unlike most of North America, we've had no snow, which is a pity...it's been the usual southern Swedish mix of rain and grey, but inside candles, advent lights and the Christmas tree area all lit. Martin arrived home on December 19 and time is already flying by. I took two days off so we could get some things done and enjoy his being home before finishing up work before the holidays. It was SO NICE to see him and give him a hug and it's SO NICE to have him home!

We had Anders' mom here on her birthday, December 23, and she stayed two nights with us. I wasn't sure how that would work out but it was fine. She slept in Martin's room and Martin bunked with Karin. We've been so busy living in the moment that I haven't had any real time to sit down and write a post, though I've thought about it several times!

After her birthday dinner, the kids and I made Christmas cookies and frosted them. I had made Rice Krispie Holly Bars earlier in the afternoon, so we had several different kinds ready to offer for dessert :) YUM! Anders also decided to get crafty and made a gingerbread house from scratch. But it's not edible...he cheated at the end and used a glue gun, haha! 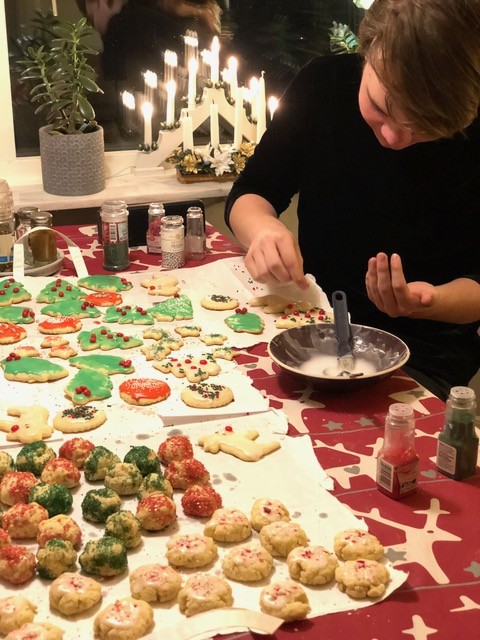 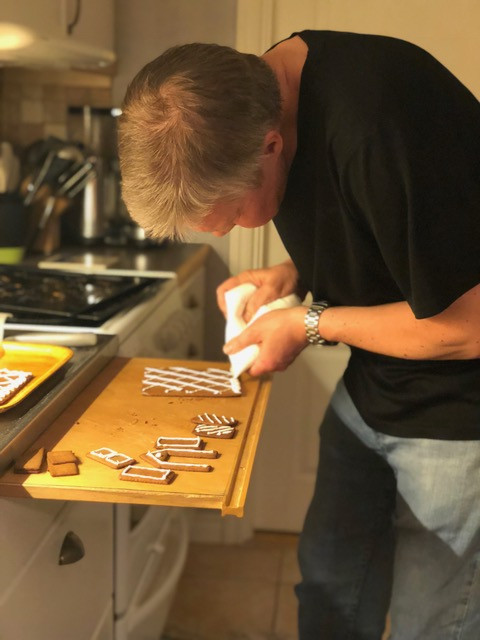 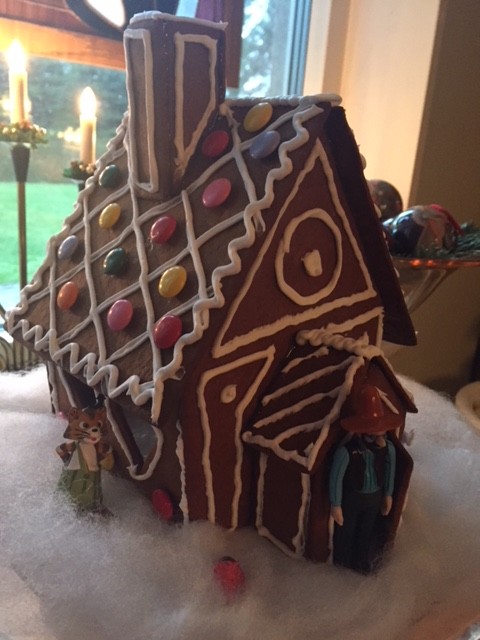 And yes, that is Pettsson and Findus and some muckles hanging out around the house! 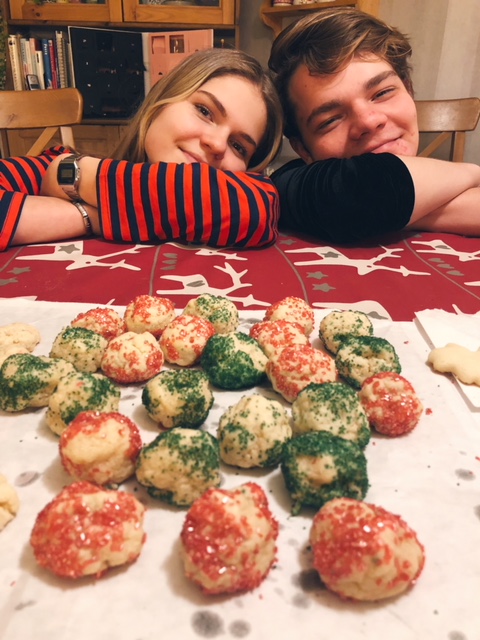 Yesterday was Christmas Eve, which is the real celebration day here in Sweden. Along with Anders' mom, his sister and her family joined us at 3 pm for the annual tradition of watching Kalle Anka (which I suffer through) and drinking glögg (which I don't drink). We had a little fika spread of pepperkakor (gingersnaps), clementines, dates, figs, and nuts to go with it. After that, each of us opened one present and then Anders and Maria finished up putting the julbord together. It was quite a spread! Ander had made meatballs with moose, and Maria brought a delicious stewed kale dish for the first time. I ate a bit too much but haven't had any after effects at all, so am really happy that my digestive systems seems to be adapting well to the loss of my gallbladder. *knocks on wood* 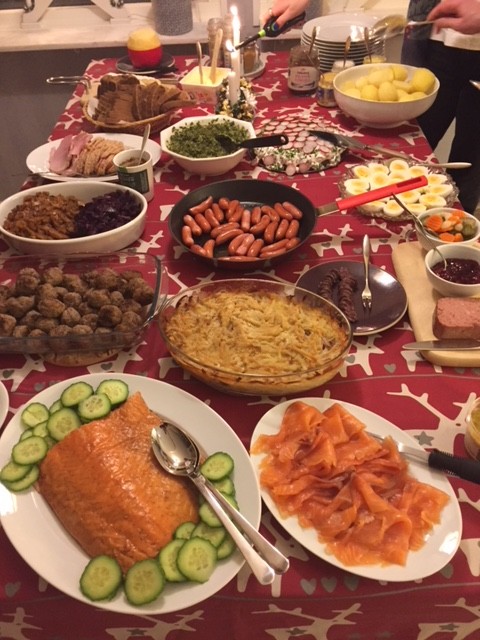 We went to bed rather late, after our guests left, as we still had to wrap stocking stuffers. I bought too many and too big, so the stocking, though stuffed, were spilling over. But I was quite pleased with the gifts I bought this year, and happy that I finished my shopping several days a week before Christmas so I didn't have to stress about anything.

This morning, on Christmas Day, I woke up at 7, but feel back asleep again. Anders got up sometime around 8:30 and I abruptly woke up again at 9 and leaped out of bed. The kids were STILL abed and so was Anders' mom, but after I started making some noise, both kids appeared. We open our stocking first, then the rule is: showers, dress, and eat something before we open the rest of the presents.

I almost cried FOUR times. My brother sent my dad's old (still functional) camera to Martin and when he opened it, I was just overwhelmed by a rush of memories. It's a Nikon from 1974, and there were even a few canisters of film included! Then Karin gave me a new phone case (mine has broken in several places) with a photo of her and Martin on it. Then Martin gave Anders and I a photobook of pictures he had taken every day for his first term of college (!) and then Anders gave me the most gorgeous ring. And I got soup from both my brother and sister, just what I wanted! :D I'm a very happy Christmas camper!

Anders received a Nespresso machine, lots of capsules and some espresso mugs, along with a RokBlok, which I had ordered, thinking it was the COOLEST thing ever, a wireless record player that runs around your record and plays it! The reality, sadly, turned out to be a little less exciting...it works all right, but the speed is slightly off. We'll have to experiment to see if we can get it working properly. Karin was thrilled to get Vans sneakers from my brother, a new pair of Ahnna Rasch earrings to replace the ones she misplaced earlier this year, and a camel-colored long coat with gloves to match. Martin ended up with a photo-themed Christmas: along with my father's camera, he got a new camera bag, a set of filters and lens holders plus some new, much-needed pants :) 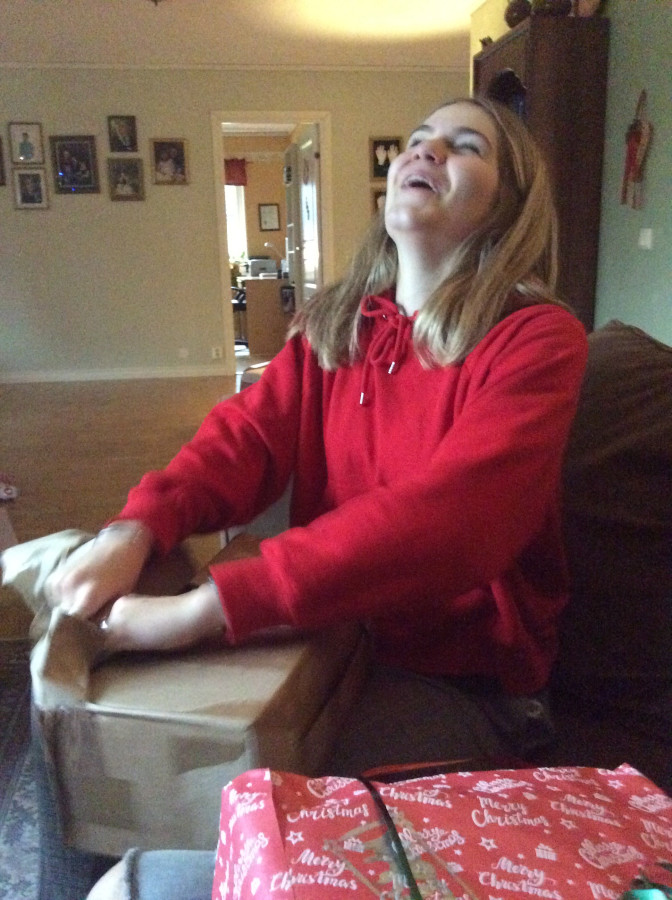 Karin reacts to her sneaker box! 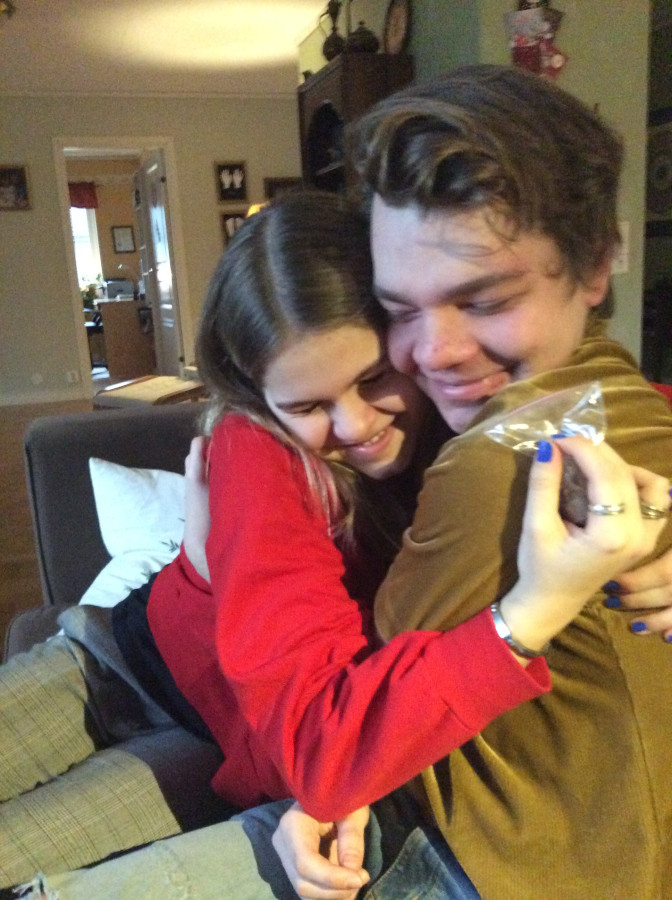 Tonight, Martin and I are going to watch Star Wars: The Force Awakens in anticipation of going to see the new Star Wars: The Last Jedi tomorrow in the theater (he's seen it twice, but I haven't been yet), after going shopping with the kids to do some exchanges. Then it's back to work for three days before the next long weekend for New Year's! 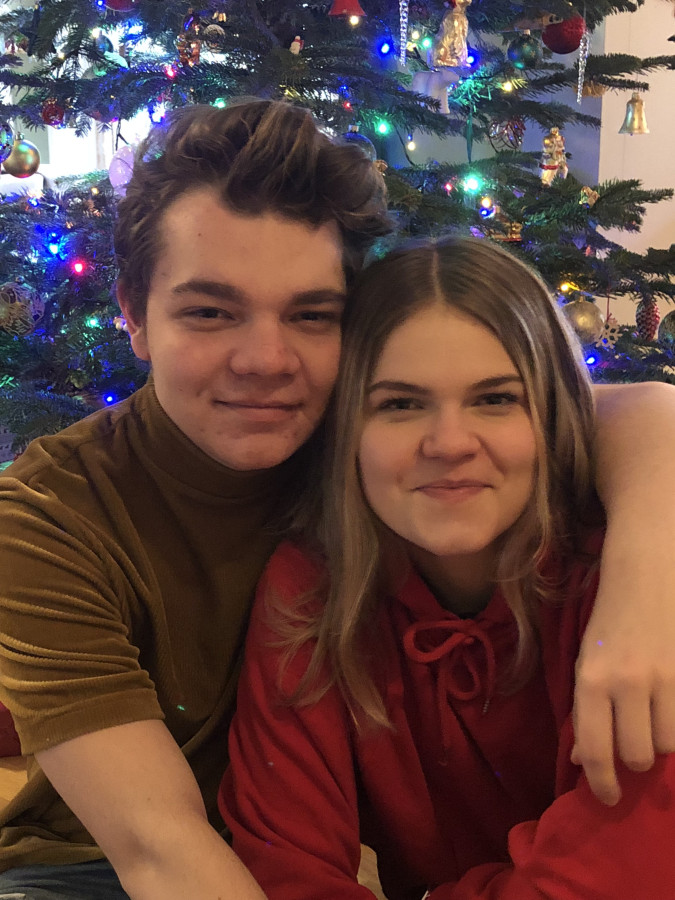 It's been a good end to a year full of ups and downs, for sure.
Collapse