Last week at work was awful. Too many things that were frustrating, rage-inducing or just plain annoying happened. I am VERY glad of this long weekend, though I am going to have to check into work emails and possibly do some work regardless because there is just so much of it. We were all freaking out over the amount of short weeks in the next two months (the first of which is this one). You'd think that we'd be THRILLED about having all this time off after the long holiday drought since the beginning of January, but 1) there are too many of them all at once, which is just adding stress to an already stressful workload and 2) I have 2 weeks of vacation in the midst of it all, which is adding to MY stress about it. Stupid, I know, but there it is.

Here in Sweden we have off May 1st which is both the European Labor Day and the spring holiday of the First of May, and the company I work for gives us the "pinch" or "bridge" days that fall on Mondays or Fridays if a holiday falls on Tuesday or Thursday. So we have Monday off as well as Tuesday next week.

Monday is the last day of April which is Walpurgis Eve; here in Sweden it's called Valborgs afton, and traditionally people light bonfires to scare away witches. That doesn't actually have anything to do with Saint Walpurga. It's named after her because it's the day she was canonized, although she was a healer and evangelist who apparently also repelled witchcraft. I find it a bit strange that Valborg is so celebrated in Sweden, since St. Walpurga was English. She's big in Germany since she brought Christianity there, but why it migrated northward is a little unclear.

We usually spend the evening with our friends Mats and Annelott, grilling hotdogs (often in the rain) and fending off mosquitoes around the bonfire, and that's the plan this year. I haven't seen them in awhile (Anders saw Mats last weekend for an overnight hike) so it will be fun to get together and catch up. It's also the King of Sweden's birthday, so raise a flag to salute the King!

The next holiday in May happens almost immediately: Epiphany, or Pingst as it's known in Swedish. It falls on a Thursday this year (May 10) and so we get the Friday after off as well as a half-day holiday the day before, since my company is super extra awesome. I could wish that some of the spring holidays in Sweden were a bit more spread out throughout the year. There are 2 more in June: June 6 which is Sweden's National Day, and June 22 which is Midsummer. After that, no public holidays until November.

Anders and I went Thursday with his mom, and my two friends Debbie and Camilla, to see Karin performing in her school's annual theatrical production. She was in the acting group last year, and this year she was in the writing group, the acting group, AND a mentor which, according to her, means that she, along with the other 2 mentors, basically ran the show. They certainly put a lot of work into it, and it showed. There were 167 students (!) involved in the play, doing everything from writing the manuscript, playing in the band, doing PR, soliciting sponsorships, working with props, program, costumes, dancing, music, makeup, photos, scenery, lighting, you name it. The film group produced a separate movie that was shown before the show started, and had a celebrity endorsement from a famous Swedish comedian (Henrik Schyffert) which was also played beforehand.

The production takes place in Lunds City Theater and the professional employees there help out with the logistics. There were some 300+ audience members on opening night and the same for last night. Tonight is the third and final performance, and I expect there will be some major partying going on when the curtain falls. This year the theme was the French Revolution. Karin played Marie-Thérèse Charlotte, the daughter of Marie Antoinette, and her mom was played by one of her best friends, Carlo De Rosa. All the kids did a fantastic job. Karin sang a solo number (new words to the tune of Mary J. Blige's Family Affair, which Anders and I have been hearing her sing in the shower for months. Unfortunately, my video skills were not up to the job and I screwed up the recording I tried to take of her full number. She says the whole play was filmed last night though, so as soon as I have a link I'll share it. In the meantime, you can watch the encore here (Facebook link only, sorry!) 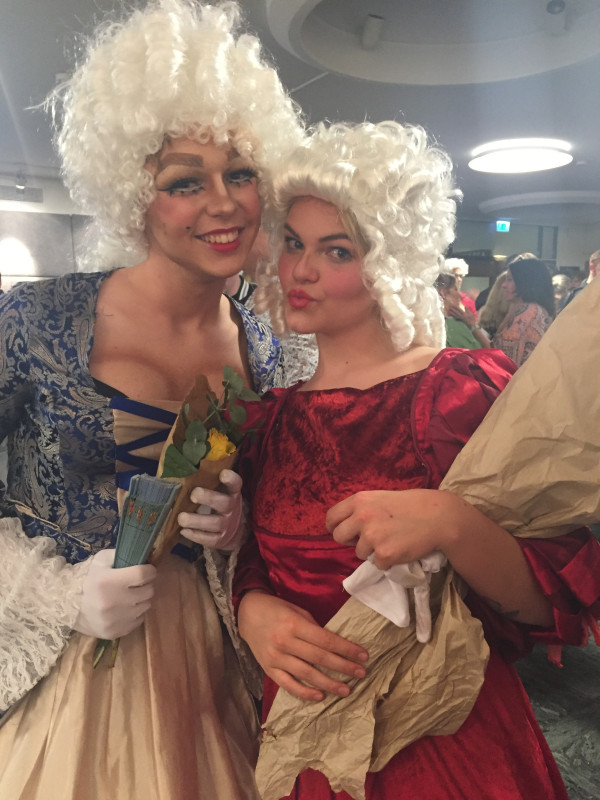 I can't believe it's nearly May already. MEGSIE—CHRISTMAS IS COMING. But with May comes the lilacs, Martin, my mom and my brother and his family, so I welcome it regardless of the work stress!
Collapse