Two down! At least, two high school graduations down. Karin had a fantastic day, starting with a champagne breakfast at the school and day full of activities until their "run-out" at nearly 4. I had thought Martin's school yard was big and crowded, but I wasn't at ALL prepared for how many people were crowded into the open areas of Karin's school. Nearly 1000 students graduated and ALL their families and friends seemed to be there, with signs and balloons and plush necklaces and champagne bottles and big smiles. 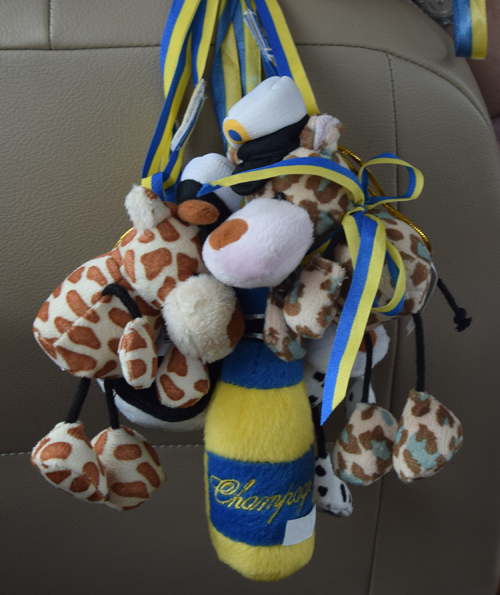 We parked at Karin's girlfriend's house and walked over to the school, only to be foiled by the crowds in trying to get anywhere near the steps where they were coming out. And for someone short like me, it was even worse...Swedes are TALL. We managed to worm ourselves most of the way to the front, but we still didn't see her come out. She found us in the crowd on her way down! 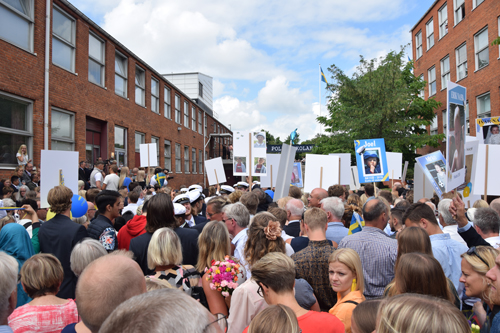 Crazy crowds at Polhemsskolan. You can see the sign in the distance where the kids came out 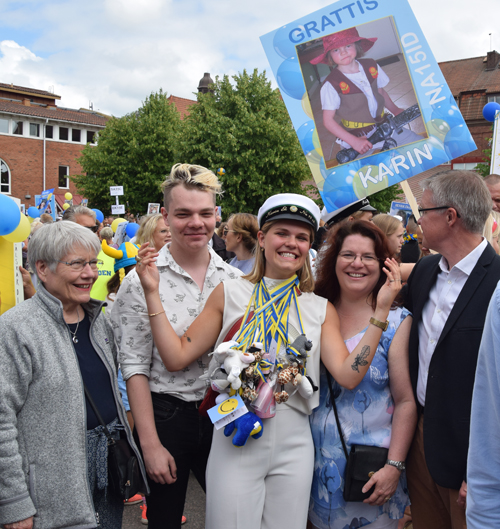 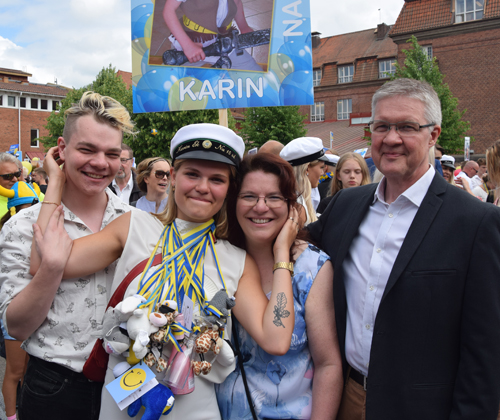 After milling about for awhile, and admiring her sign and greeting some of her friends who had also graduated, it was time to head over to the trucks. The day before graduation, Karin told us that they might not be able to go because the truck company required a chaperone over 25 and the kids were having trouble finding someone. I mentioned a friend of mine, who is in the PhD program at Lund University...just a week before she had been lamenting on Facebook that she'd never get to ride a graduation party "flak" because it only happens at high school graduations (she's British, married to a Swede, and the mother of an adorable little boy). Karin sent her a message immediately and I was SO glad I'd thought of her because she said YES! YES! YES! and was overjoyed at the chance! Haha! Considering most adults, including Anders and me, would rather shoot ourselves than get on that truck, it was a huge relief that she was not only willing but thrilled at the idea. :D 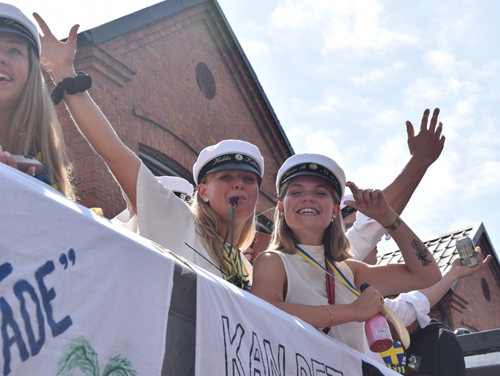 All aboard the party truck! 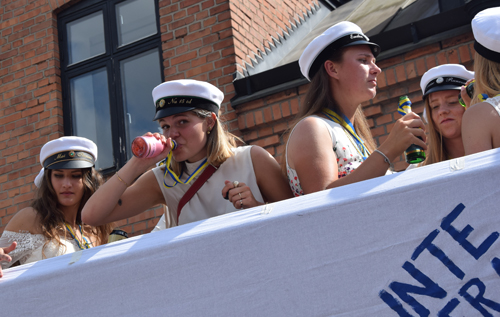 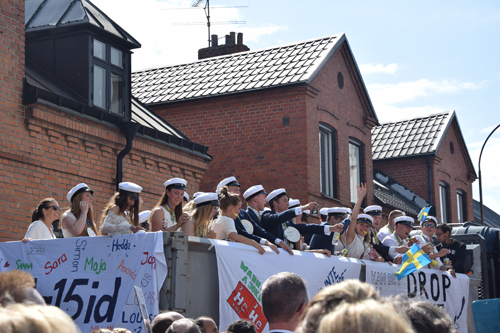 My friend Carys, who later told us it was "the best day of her life" is in the far right back corner 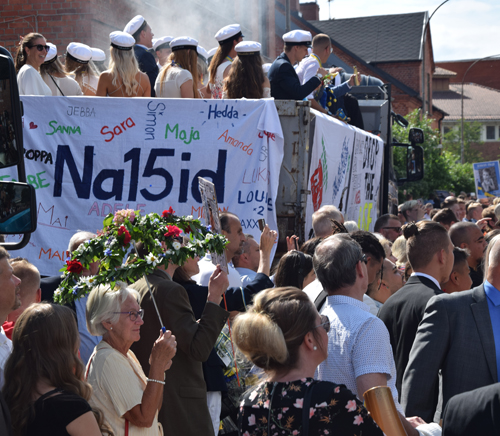 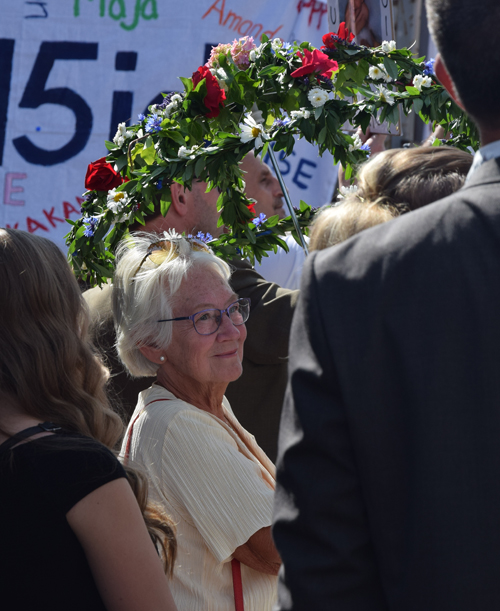 We left Lund and made our way through horrible slow traffic back to Flyinge to get the party started. My colleague Anette's daughter and her friend came right after we arrived and were put to work immediately in the kitchen cleaning strawberries and preparing cakes. We had most everything ready, since the tents were already up and we had spent the morning decorating with flags, balloons, streamers, garlands and birch branches. Karin's student sign went out front to greet guests and the party game was up on the wall with the pile of answer sheets ready. The kegs had to be trimmed, claimed my husband, and he set about taking care of that part with a will, haha!

Karin arrived just after the majority of the guests, driven home in a convertible BMW. 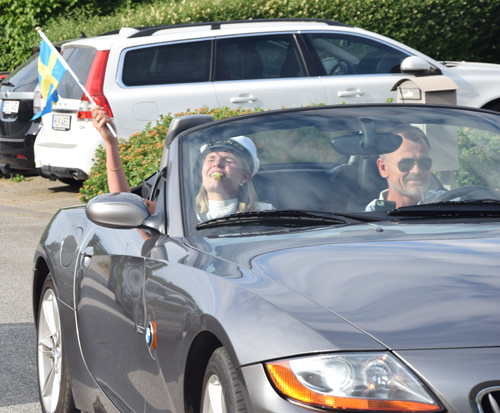 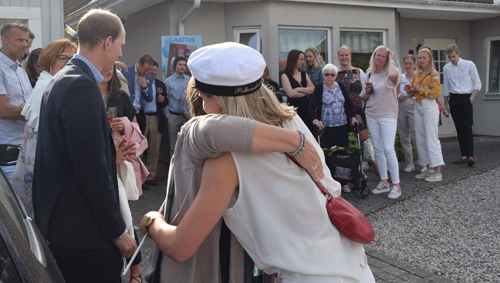 We had about 75 people, plus lots of Karin's friends who came and went during the course of the evening. I said hello to everyone and then ran back and forth between the kitchen and the tent, dealing with food and drinks and felt like I never had a chance to sit down or talk with anyone. I did manage to eat something, and was happy that the food we had ordered was really good, and the cakes the girls put together were delicious. You can't go wrong with strawberries and meringue! 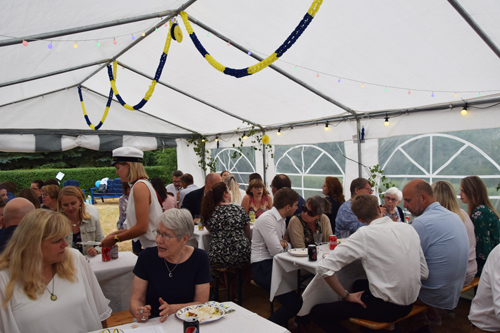 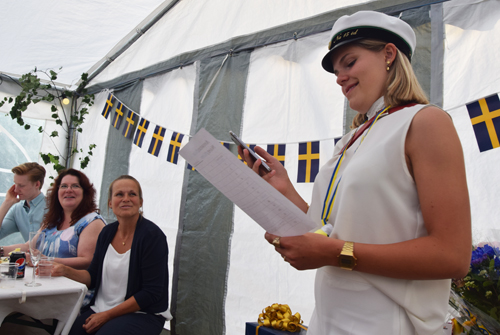 The trivia game about Karin was really fun; everyone participated and there was some real competition over who the winner would be!

A big highlight of the evening was Anders' speech to the graduate. I gave the speech at Martin's graduation, so I told Anders it was his turn, and boy did he ever show me up! He did a FANTASTIC job; it was hilarious! You can see the whole thing here, though I apologize to my English-only readers: it's all in Swedish.

Another highlight was Karin's girlfriend Sandra's present to her: a long video with clips from many of her friends and family, telling her what she meant to them. We all gathered in the living room (all 75 of us!!) to watch it, and there were not very many dry eyes by the end :)

Because it was a Tuesday evening and most people had to work the next day, the party ended rather earlier than we had hoped...most people were gone by 10. I had the week off, though Anders had to work, and my mom and I spent the next day returning things and cleaning up, finally collapsing just about the time Karin finally got home...for a well-deserved nap!

She's taking a gap year, but has already started work at my company this week, with a summer job to see her through August at least, and possibly longer. She wants to save money, get her driver's license, travel and then figure out what to do next. I'm sure whatever it is will be typically Karin: social, fun, open and exciting!
Collapse