We were supposed to be three friends going to Lisbon but Camilla was super sick the whole week before and on Friday, 2 days before we were to leave, she called Debbie and I and told us she was probably not going to go since she was still so poorly. WAAH! What a bummer. She was able to get her airline ticket refunded but it ended up being just Debbie and I headng to to Portugal last Sunday. Despite our disappointment about Camillla's absence, we managed to have a good time.

I had so many people tell me how great Lisbon was, and how charming, and how pretty that my expectations were a little too high. It was NOT the most charming of cities, though it was not without charm. It was very obvious that Portugal is a poor country and its capital city reflected that: many parts of the city were run down, dilapidated and dingy. Graffiti (and not the arty kind) was rampant as was piled garbage. We had a service apartment a bit far out from the center, on the outskirts of the Alfama district, and because Lisbon is very hilly we spent a lot of time walking up and down hills, on the cobbled and patterned sidewalks. The charm of the city has to grow on you, I think, and it did, but slowly. To be fair to Lisbon, I suspect late February isn't the best time for it's charm to show to advantage. A few more weeks into spring with the jacaranda trees blooming, and I bet we'd have been totally down with the charm.

We arrived late on Sunday night, and on Monday morning we walked uphill and found a café that served breakfast.Then we headed into the center and bought a 3-day pass on the hop-on/hop-off tours. They had 4 bus routes, a tram route through the old town and a boat tour that went down the coast to the edge of the city. Our apartment was only 2 blocks from the water and we could see the River Tagus from our windows. I didn't even realize that it was a river at first...I thought it was the ocean, but hey, close enough!

On Monday, we mostly got oriented. We did one of the bus tours and the tram tour through the old part of town, with its winding hilly narrow streets and sudden pretty outlooks over the city. It was a grey day, very overcast and quite chilly, but as the week progressed, so did the weather; it got warmer by several degrees each day we were there. Colored and painted tiles line the facades of many of the houses, though they weren't always in good condition, and most of the buildings were light, warm pastel colors with red tiled roofs. 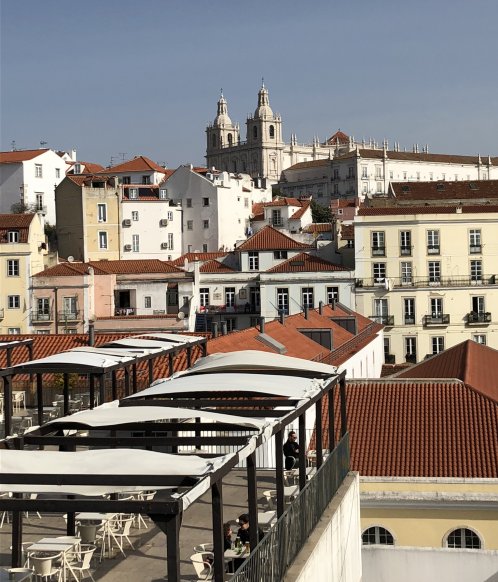 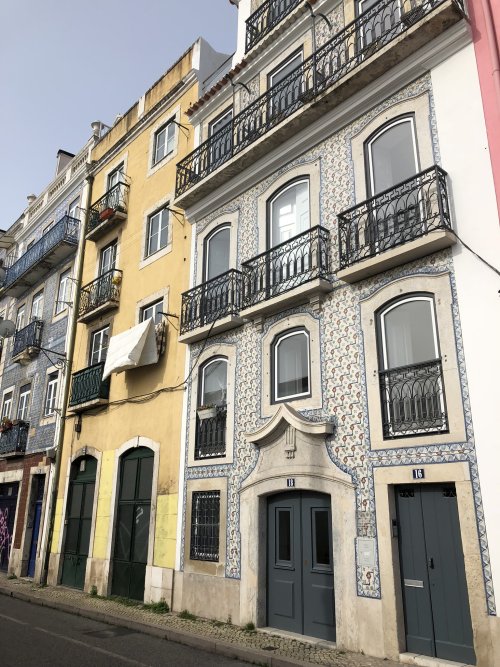 By the end of the day we were quite tired and we took an Uber back from downtown to our apartment and used Uber Eats to order in dinner. Sushi! Cheap and easy! We had also heard a lot of praise for Portugal's food. Fish and seafood were the main stars of the menus we saw, with cod and sardines the things to eat. We tried a traditional cod cake one day but were super unimpressed: salty and bland. Bleah.

We stopped in lots of little souvenir shops and got a feel for the things that are considered typical of the country: colorful tiles, fish designs on everything, roosters, lots of ceramics in the shapes of fruit and vegetables, and cork products were everywhere. Portugal is the world's largest source and exporter of cork, accounting for approximately half of the world's harvest. Cork, I was interested to read, is a sustainable and environmentally-friendly product. Plus it's quite pretty and very far advanced from what one traditionally thinks of as cork, which in my case was stoppers for wine bottles and boards for sticking things on.

Cork nowadays is made into a lightweight, supple and flexible almost fabric-like material and used for all kinds of things. One person told us they are discovering new uses for it all the time. We saw lots of handbags and backpacks and small things like coin purses, pouches and wallets, but we also saw hats, fans, packaging for chocolate bars, gloves and even shoes! Much of it was left natural but there were plenty of items with printed patterns and other colors. Some of them were quite beautiful.

On Tuesday, we went to the Feira de Ladra, or Thieve's Market, a huge open-air flea market that winds throughout the old town. The first part, only a block up from our apartment, was mostly junk, but as we walked on, we found jewelry, ceramics, art, souvenirs, antiques, and all kinds of bargains. I bought a couple of rings for Karin and a cork bracelet for Martin and a marcasite bracelet by a local artist for myself as well as a tiny silver rooster charm to add to my charm bracelet of countries I've been to.

As the days got warmer and the sun came out, we enjoyed the city more and more. We took the boat tour down the coast to the Belem Tower and sat in the sun by the seaside. We saw the sights one is supposed to see in Lisbon, including the Monument to the Discoveries (originally built for the 1940 World Exhibition) and the Santa Justa Elevator. We went to MAAT (the Museum of Art, Architecture and Technology) where we thought the building was fantastic, but the exhibitions were only so-so. Just by coincidence, on the bus on the way to the MAAT, I saw a huge sign for the National Geographic Photo Ark exhibition with photographs by Joel Sartore and was thrilled, so we went and saw that, too (it was fantastic).

We also spent a little time hunting down a street art installation by a Portuguese artist I follow on Instagram: B0rdalo ii, who is from Lisbon. He makes huge animals out of trash and plastic waste to highlight what our consumerism is doing to wildlife around the world. It was on a double-set of walls with a balcony overlooking a little parking lot and it's been there long enough that small trees were growing on the roof of the first wall, nearly obscuring the raccoon's eyes! 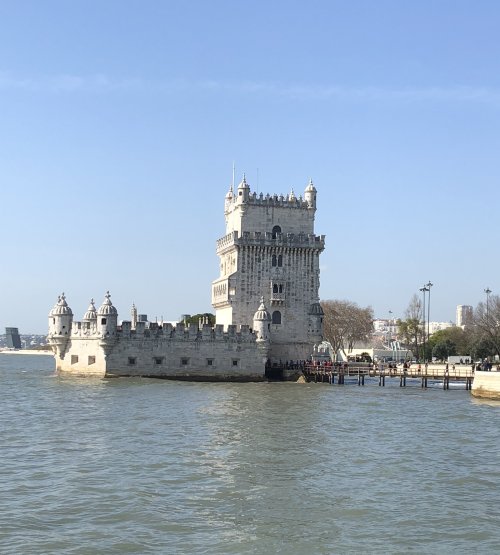 Belem Tower from the boat 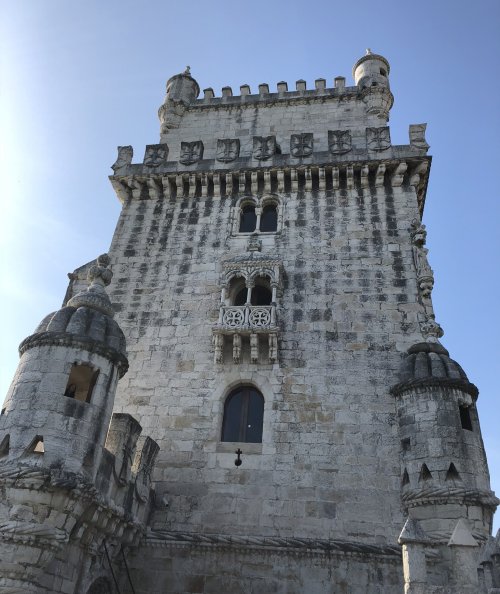 Queen Philippa of Lancaster, the lone woman out of the 33 figures of famous Portuguese explorers and discoverers on the Monument to the Discoveries. She seems to have been included because she was the mother of several influential and illustrious children including Henry the Navigator.

We tried lots of Portuguese pastries and agreed that the famous traditional custard tarts, called Pasteis de nata, were delicious. We even went to one bakery and watched them being made. I brought home some to share with Anders and Karin. Anders also got sardine paté and Portuguese brandy. :) 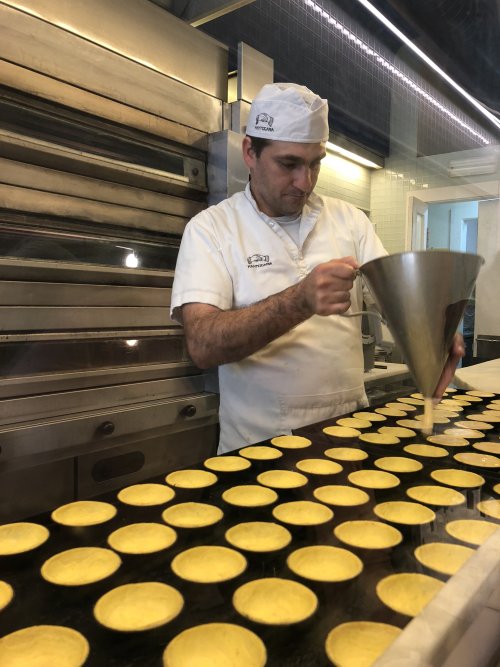 On our last evening, we went the other way on the street from our apartment, looking for a place to eat dinner, and found, right around the corner, a delightful little restaurant run by two young ladies (sisters) with an appealing menu and reasonable prices. If you're in the neighborhood sometime, we can highly recommend both the food and the service at As Ladras!

All in all, it was a good trip and fun to add another country to my been-to list and to get to know Lisbon a little bit in the 3.5 days we were there. The people were all friendly and helpful, and most spoke English to some degree, which made things easier. It was a relatively cheap city to visit and to eat in, we thought. The one thing we didn't do that we had originally planned was a day trip to see the castles of nearby Sintra, so maybe that will give me an excuse to go back to Portugal some day, in springtime perhaps, and really find the charm that is so obviously lurking beneath the surface.
Collapse