Karin's trip to South America was 2/3's done this past week. She and the girls were in Bolivia and heading from Lake Titicaca to La Paz for a couple of days last we talked. It's been great that they have all been so good about posting on Instagram every couple of days and she has also texted us quite often and we've talked via Messenger almost every week. Helps to keep the distance a little smaller.

After the mid-week holiday, we came back to crazy busy at work, as usual. Thursday felt like a Monday and one of my teammates even asked me when she came in if we were going to have our usual Monday team meeting. "It's Thursday," I said, and then laughed, "I did the same thing!" We had an extra lot of work because so many people have submitted tickets during our day off so I was head down, banging out answers and putting things together all morning. Around 11 am, Karin sent me an SMS: 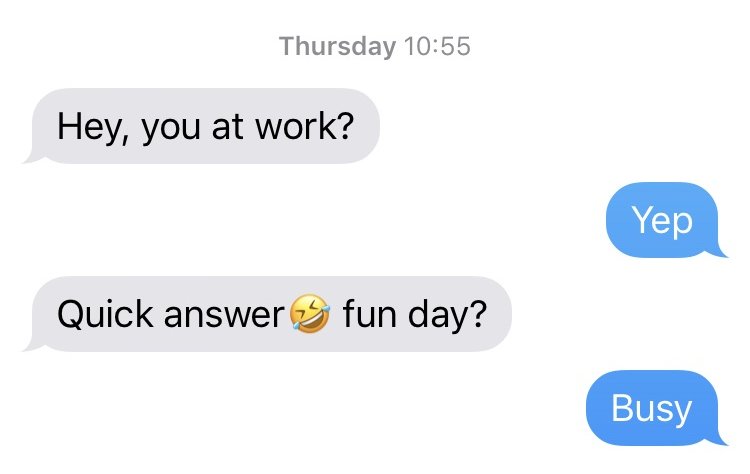 Texts are a little annoying when I'm really busy at work because they break my concentration. I also hate typing on my phone since the keyboard is so tiny and inevitably I have to retype everything more than once due to hitting the wrong keys constantly.

She didn't answer again and I didn't think much of it. About half an hour later, I saw out of the corner of my eye that a couple of people were walking toward my desk. We sit in an open landscape so there's no escaping anyone. When they were quite close I looked up, prepared to smile and ask what I could help them with, except

It took a second to register that it was really her, and by then we were hugging. I was SO SHOCKED. What? What the?! What are you DOING here??? And then, realizing she was tearing up (and well, so was I), DID SOMETHING HAPPEN??

No. No, she was fine. She was just home. A month early. My manager was the one had gotten the first shock, seen her coming to the door, and let her in, and brought her over to me.

She's tan, and bleached blonder by the sun than she was when she left, and slim and beautiful and HERE.

Of course, then she had to go around and hug and say hello to everyone else at work (since she worked with us for 8 months before leaving on this trip), but then she sat down and told me what and why and how. She hadn't told anyone she was coming home, as she wanted to surprise us. One of the other three girls she was traveling with had been suffering from severe separation anxiety and panic attacks about the traveling in South America (scared of the buses, and scared to fly) and it had been getting worse and worse and she finally decided she had to go home.

Karin, who was also feeling a bit homesick, figured she had done the majority of the things she really wanted to do. They had had a month of surfing and fun and beaches in Costa Rica and a month in Peru hiking the Inca Trail and seeing all the sights, and once they got to Bolivia, even though they still had 2 more countries to go, she said they hadn't planned much in advance and she thought she'd just be spending extra money and she just felt it was time, plus her friend really needed someone to go with her, since she wasn't capable of flying by herself, so they changed their tickets and headed home to Sweden. The other two girls are finishing off the trip alone but apparently are fine with the situation and thought it was for the best, so all ended on a good note.

After work, back at the house, we waited impatiently for Anders to get home. He's usually home around 5:30 or so, but it got later and later and he still hadn't shown up. Karin wanted to take a shower, but kept waiting because we figured he'd pull up as soon as she got in. I couldn't text him and ask him where he was as he would have found that strange and wondered why. Finally, at nearly 7 pm, I told her to go ahead and get in the shower, and SURE ENOUGH, a minute later, he pulled up.

I went in to the bathroom and Karin turned the water off, and after I heard the door, I went out and said, "Oh hey! Was wondering where you were! You got an early birthday present!" and then Karin opened the bathroom door and came out. :D

We went to Malmö for a very late dinner to celebrate her homecoming and talked about all the things she had done and seen, and looked through some of her photos, then we left her there to spend the night with her girlfriend. She met me at the end of the work day yesterday and we went to the grocery store together and then cooked and had dinner with my friend Camilla (also shocked and surprised!) and then watched all three episodes of Game of Thrones together so she could get caught up. Today, we went shopping and I dropped her off in Lund, as she was going to go see a bunch of friends.

One kid home, one to go, in just another week and a half!
Collapse