How many friends do you have? How do you count them?

Do you count the ones you went to school with?

The ones you live near?

The ones that are related to you?

The ones that you used to hang out with but haven't seen in years?

What about friends at the gym, or in the club, or at church, or at the pub?

And if you've never actually met them in real life...but you're friends online, does that count? Blog friends, Insta-friends, Twitter-friends (if that's a thing)?

And your imaginary friends? Where do they fit in? Does that include the characters in books or film or television that you are pretty sure you'd hang out with if they were real (or you were not)?

I estimate that I haven't seen at least half the people on that list in 5 or more years. Maybe they lived here once, but they've since moved away. Maybe they were members of the AWC but dropped out or are no longer active. Maybe I went to school with them or worked with them long ago. We had something in common once. Facebook keeps it in common, despite the thinness of the current connection.

And there are a good dozen that I have never met: bloggers mostly, but some others as well who friended me on Facebook for various reasons. Some who worked or work for my company but in a different country.

It's a weird feeling to meet someone in person that you consider a friend because you "met" online. Someone whose words you have read, whose life you know something about, whose family you've seen pictures of, whose kids you've seen grow. But who you don't really KNOW. You don't know the faces they make when they laugh or how they accent the funny parts of a joke or the shapes of their hands or whether they're a good driver or anything really, beyond what they have chosen to share online. There's always an element of suspense when you meet someone in person that you only know from an online connection. Will they live up to your expectations and assumptions based on what they've revealed about themselves? Will the real person MATCH your perception of them? Are they a reliable narrator?

I actually have lots of friends who aren't on Facebook, and they still count as friends, right? My husband, for one. And just because my kids are on Facebook, which means they are in my Friends List, they aren't active there, hardly at all, so do they count as friends? They're my KIDS. Are we supposed to be friends? And does it really matter what label we put on each other, anyway?

There are many of my Facebook friends that I sometimes wonder about: why are they Facebook friends with me at all? Do they like me...really like me? If we never see each other, never comment on each other's posts, never even "like" them, why do we stay connected? Out of politeness? Out of some sort of weird, delicately balanced, unspoken social media etiquette that says once you are "friends" with someone, you have to stay that way forever? Maybe you can only unfriend them if you find out who they voted for and it wasn't who you think they should have. Maybe you can only unfriend them if they die. Although, that doesn't actually seem to be the case. It feels like a betrayal of the friendship you once shared, if you do.

Anyway, all this musing and where's my point?

I've met several blog friends in the past and without fail, they have all been lovely people, who nearly exactly mirror the image they project online of themselves in words and photos and ideas.I'm proud to call these people friends even though mostly they live in my computer (and often very far away), and sadly, not on my street: Elizabeth, Christina, Chuck, Marie, Breana, Laini, and a whole pile of Livejournalers.

I've gotten to meet TWO blog friends face-to-face this year: I saw Chuck in Seattle (AND his wife, finally!) and even though it wasn't the first time I got to meet him in person, it was still extraordinary because of the physical distance and rarity in being able to make such a get-together happen. And Seattle was even more special, because not only did I get to have dinner with Chuck and Julie Kae, but I got to spend time with my mom (whom I also consider a friend!) and my best and longest-time friend, too.** 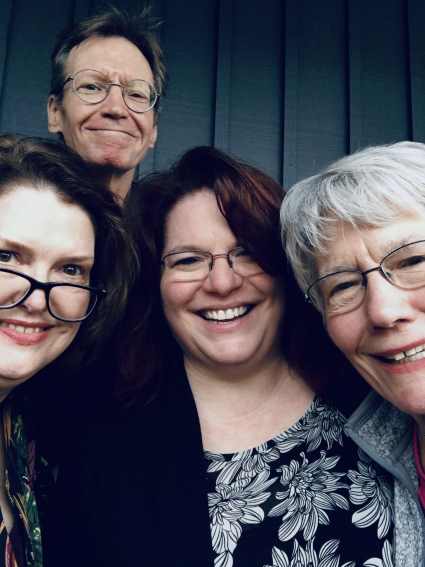 Yesterday, I got to meet another long-time online friend. Bethany used to be a blogger and she used to write wonderful stuff. She doesn't have time anymore, as her life is quite full at the moment. She doesn't read blogs anymore either, from what she said, but she's still a presence in my life. I see her posts on Instagram and Facebook and I comment there, and she comments on mine. She lives in Italy with her husband and 2 girls and though we tried once before, years ago, we have never managed to get together in person. But lately, she and her husband have been traveling to Sweden a lot for their business. Mostly to Gothenburg which is still several hours away, but this time it worked, because instead of flying straight there, they packed their kids in the car and drove north: partly for vacation and partly for work. And on the way back down, they stopped in Flyinge and had dinner and spent the night with us.

And now I can add Bethany to my list of blog friends who have crossed the line from virtual to real. I know she won't be the last. Now if I can just figure out how to get to Colorado Springs, Minneapolis and Brandon, Mississippi. 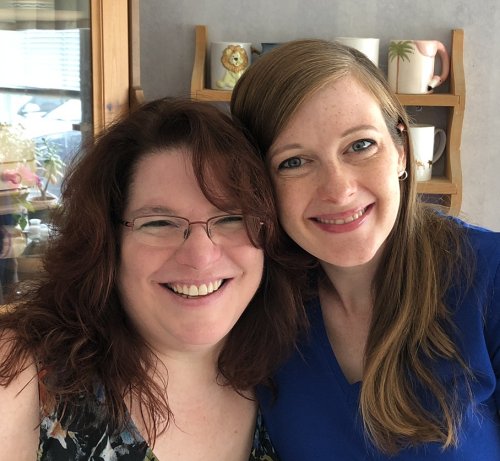 *J.M. Laurence
**She doesn't like it when I call her my oldest friend :D
Collapse