Megsie tagged me a book meme on Facebook, which is kinda the only meme that I can't resist. It's posting 7 books you love for seven days. When you read as much as I do, it's REALLY hard to only pick 7 books. Do you pick your FAVORITES? (Impossible to stick to 7, in that case). Do you stick to one genre? Do you play to your audience? Do you choose only newer books or only older ones? What if you like really quirky books or complicated books or Harlequin romances or you feel children's literature is underrated and not hyped nearly enough...HOW DO YOU CHOOSE? Haha! The terrible trials of a bibliophile.

I posted book 5 today (though I cheated by posting two books yesterday) and now I only have 2 more days. Or rather, NOW I ONLY HAVE TWO MORE BOOKS. The pressure is on! I'm trying to avoid obvious crowd-pleasers or books that everyone has probably already read (sort of). I'm trying to mix things up so I'm not only posting fiction, and not only posting non-fiction. But honestly, if I was going to post all the books I really loved, we'd be here forever. I feel that I'm not being fair to some books/authors that I won't have time to include. I'm not being fair to real favorites like To Kill a Mockingbird, or Winnie-the-Pooh since it seems like it should be obvious that I love those books (among so many, many others)...I shouldn't have to post those, right? You should already have read them; you should KNOW how good they are.

Every last day of every year I post a list of the best books I read that year, so I have a wealth of titles to draw from. But I've only been doing that since I started blogging, so even though that's a long time, there are still lots of books I love that aren't on those lists.

I find that I can't justify buying actual physical books as much anymore. Though I LOVE books, and I love the way they look on the shelves, and I love the weight and smell and feel of them, it's hard to buy more THINGS when I'm kind of thinking it's time to stop buying THINGS. I buy books on Kindle, but they are not nearly as satisfying (except for the instant gratification part)...they don't have a pretty color cover, for example. Maps and illustrations and photos are all black-and-white (on the model I have) and they are hard to zoom in on and see details of.

After I got my Kindle, I thought I'd mostly use it for traveling but that hasn't turned out to be the case. And even though I would normally want to have the actual physical books on my bookshelf, once I've bought them on Kindle, I don't want to pay for them again. So, I have to remember that I have purchased them, since I remove them from my device once I've read them. So far, for the meme, I've posted three non-fiction books, two young adult fantasy books (together) and one fiction novel.

In other news, Karin has her last week of full-time work at my company this week, then she will start a project management course at Malmö University that goes through January. She's mentioned another course that she might take in the spring and then the possibility of starting a 3-year marketing communications program at Linné University in Växjö. It's only 2 hours away but the campus looks really lovely and she's heard good things about the university and student life there. Until then, she's still working hourly at my company and at a local venue in Lund that hosts concerts, movies and a nightclub.

Martin is in the process of moving into his first real apartment in downtown Detroit. It sounds like it's perfectly placed and in a nice area, and close to lots of possibilities for job-hunting which is his next mission. It's a 4-bedroom and there are 5 kids renting rooms (Martin is sharing a room, which will help to keep his costs down). It's quite close to Wayne State University and 3 of the roommates are students there. I'm hopeful that Martin might consider taking classes there in a year or so to finish up his degree, but in the meantime, he's going to get lots of experience in living on his own! I'm a little bummed that I can't just pop over to his place to see it, help him get things he needs, stop by to take him out for fika, etc. We haven't made any future plans for going to the States, but he's got a year's lease, so maybe I'll get to see it before the lease is up, at least.

We had an after-work (meaning after the work-week since it was yesterday, on a Saturday) Go-Kart event yesterday with 28 people from the Marketing Department. It was 27C/80F (we're back to full-on summer temps) and it was REALLY hot since there were no clouds and no shade by the track except inside where you couldn't see anything. We were divided into two groups for a 5-lap training run, then had 2 5-lap heats each to determine the fastest drivers, then we had a final 8-lap race for the 10 fastest drivers and another final for the 10 slowest drivers...except that everyone who was slower than me bailed on the finals, so I came in dead last. :D Guess who won the whole thing? 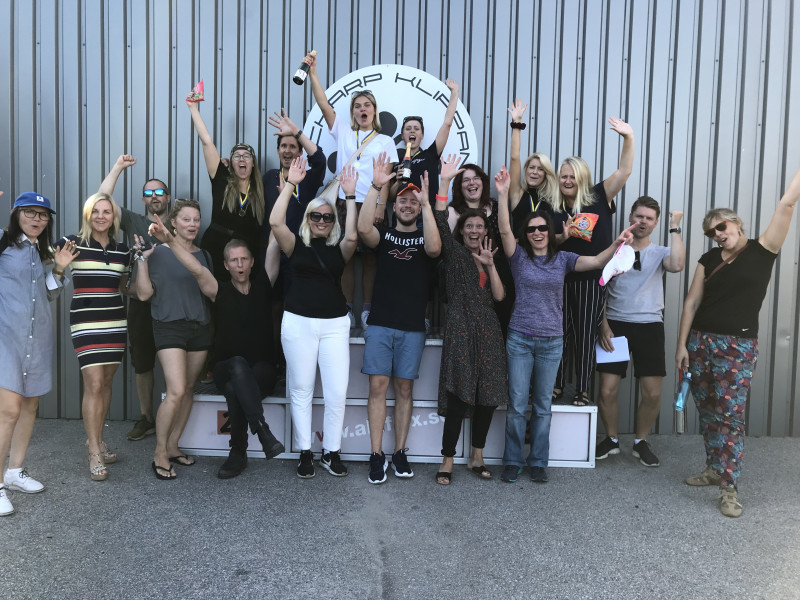 It was really fun and most of the group went out for a lovely dinner afterward, though Karin didn't come to the dinner since she had a previous engagement, which was just as well since she would probably have spent the entire time lording it over the others :D ...my neck and back and arms are super sore today, though.
Collapse