We spent last Christmas in Michigan with Liz’s mom and Martin and our good friends Kathey and Russell joined us there for New Year’s so we had a very happy start to the year! We were back in Sweden by January 4 and back to work nearly straightaway, leaving Martin behind to continue his second year at CCS.

At the end of January, Anders went skiing in Czech Republic with friends on their annual ski trip. He had several work trips early in the year as well, all to Italy. Karin continued working at Axis with Liz as her contract was extended, and then again, all the way through the summer. Work seems to never slow down much and it was crazy for months, especially at the beginning of the year. At the end of February, Liz went to Lisbon with one of her best friends, for a week. It was supposed to be 2 best friends, but one had to cancel at the last minute due to illness. Lisbon was lovely and very hilly and another country to add to Liz’s long list of places she’s been.

In March, Karin left for a 3-month trip to South America, with 4 friends. Their itinerary included a month in Costa Rica, starting with a 2-week surf & Spanish course, and then moving through Peru, Bolivia, Chile and Argentina. They had a trip Instagram set up so family and friends at home could follow along and see what they were up to. Two months later, she abruptly showed up at home, having accompanied one of her very homesick friends back to Sweden, after deciding she was ready to go home, anyway!

Martin came home mid-May to spend a month and a half in Sweden, and relax a bit after the stress of university projects and finals. It was really nice to have the whole family together again, for a little while! Liz was finally able to talk her manager into allowing her to attend a big Adobe conference in the US, and in June, she headed to Seattle for a week. Happily, her mom was able to join her, and her best oldest friend Becky drove up from Oregon to spend a couple of days. And she even got to see a good blog friend who lives in the area! Even though Liz was busy at the conference during the days, they had a great time in the evenings, and Liz and her mom were able to sightsee a bit the day before the conference opened.

As soon as she was back from the US, it was Stockholm next, with Anders and Martin in tow, to see their friend Russell racing, and spend midsummer with mutual friends. Martin returned to Detroit at the end of June to start a 3-week work program at his school and figure out his living arrangements for afterward as he has decided to take a break from college. At the end of August, he and his boyfriend Malachi found an apartment in downtown Detroit and moved in with several other roommates. And after several nail-biting months, he landed a job at a sushi restaurant within walking distance: perfect! :D

This year, Karin turned 20, and Martin turned 22. It’s hard to believe they are so grown-up and starting out on their own adult lives. We went down to the Netherlands for a lovely week in mid-August, with Karin along, to meet up with Liz’s brother John and family. which was super fun. Karin started working part-time at Meijeriet, a concert & event venue in Lund, while continuing a few hours a week at Axis. She is currently in the middle of a project management course at Malmö University, and is planning to start a 3-year marketing communications program at Linné University in Växjö, next fall. She is back to playing soccer in Lund, and climbs several days a week at the Climbing center in Malmö.

Liz is still on the board of the AWC, and joined a choir in the fall, but is hoping to find another one that is a better fit, next year. Anders has continued to kayak when time and weather allow and goes mountain biking with friends in the area during the spring and summer months. This year, Martin will be in the States for Christmas, with Liz’s mom, if his work schedule allows, and the rest of us will be here in Sweden...the first time we’ve been apart for the holidays! :( We hope that you and yours have a wonderful holiday season no matter where you are or who you’re with! 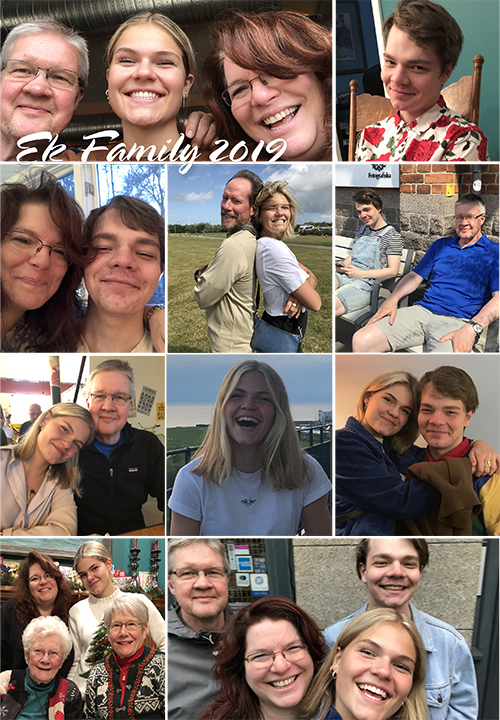