I follow my college roommate's daughter Erin on Instagram; in fact, she has two accounts and I follow them both (along with her mother's, of course). One of them is her professional account (she's a content developer) and the other is personal. She's older than both my kids, and we've seen her and her brother along with her parents (who met in college; he was also a friend back then, and still is, though he's not on social media) every time we've been home in Michigan for the last 23 years, so even though it wasn't often, I still have always followed along with what she's been up to.

Yesterday, as I was swiping through Instagram, she had been posting about Spotify Wrapped (which, if you aren't aware, is Spotify's personalized year-in-review for users that gives them info on what genres they listen to, what their most played song was, and favorite artist, and so on) and she had posted a series of videos talking about her results, and her favorites. She's VERY into music, and has worked in the industry, both playing and organizing and marketing bands and artists. In one of her posts, she mentioned regretting missing a favorite artist once some years ago when she was at SXSW and let her friends talk her into going to the bar instead of the concert she wanted to see. She asked if anyone reading had a similar musical regret, and whether it could beat hers. So, I wrote this and she answered with an appropriately appalled emoji: 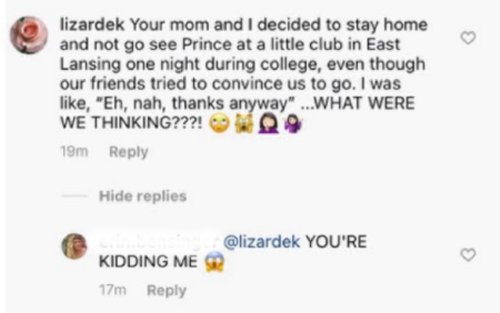 I know, right? So stupid. I was in bed, on my ipad, for this conversation and the clock was edging toward midnight. About 5 minutes later, a text message came through from an unknown US phone number that said only:

"You got me in trouble for being so dumb."

It took me a minute to connect, since I didn't know who it was, and I answered, "What?"...only then the ball dropped and I wrote, "About Prince?", suddenly connecting that it must be Julie, my college roommate and Erin's mom. "Yep," she said. And then I laid in bed giggling madly for about 10 minutes.

"Too funny," wrote Erin to her mom and me, "I guess I can't blame you for not making decisions based on 'will this make me feel like an idiot in 40 years?'"

We regretted our decision and felt like idiots almost immediately, in fact. It must have been sometime in 1983 or so that this happened. Our friends came home raving about the show. Prince was already a popular artist, and 1999 was on constant radio rotation as well as Little Red Corvette, so even I knew who he was. Not too long afterward, Purple Rain came out and cemented our stupidity. We would have paid almost nothing to see him in the intimate setting of a small college-town club, but after 1984, ticket prices and his star went through the roof.

I replied, "Actually, I think we should base all our decisions on that" ...still laughing.

I never managed to see Madonna either, but tickets to her shows were expensive almost right from the get-go, that I remember. I did manage to see David Bowie, Janet Jackson, Rush, Foreigner, Johnny Clegg, K.D. Lang, Melissa Etheridge and Elton John (3x now), and lots of other excellent artists, which is a post for another day, so I guess I can just think of Prince as the one that got away...due to my own idiocy.

Julie's parting shot, before I put the ipad down: "I won't live that one down any time soon. Thanks a lot! LOL"

I laughed myself to sleep.
Collapse