Karin was just over 3 years old when we moved into this house. As I've mentioned before, we had the house built to "painting-ready" and once we got the keys, Anders did everything else in the house: flooring, painting, trims, wallpapering, tiling,...everything. With two little kids under 5, we had our hands full, and some parts of the house weren't done when we moved in (the important parts were) so there was a lot of box shuffling and moving things around.

We had a lot of fun choosing the decor for the kids' department which consisted of their two bedrooms and the playroom. The kids picked the colors and wallpaper trim they liked, and then we did the rest. Martin's room was red and yellow with lots of animal-themed prints and accessories. Karin's was green and yellow with a bubble butterfly chair rail wallpaper trim, and round green rugs to match. You can see photos of the original kids' rooms here: http://www.lizardek.com/house/kids_dept/

I had lots of great framed prints and paintings that worked really well in the kids' rooms as well, and in Karin's room we put up five framed Åke Arenhill fashion prints. I LOVED those 5 prints. They were illustrations of Swedish ladies wearing typical dresses from the 18th and 19th centuries. My sister had framed them for me with lovely simple textured gold-flecked frames when she worked as a framer and got an excellent employee discount (I had a LOT of stuff framed while she worked there).

Anders had gotten a giant portfolio of Arenhill's prints on his 30th birthday (from his parents, he thinks). I can't remember if there were more than the 5 that I picked out for framing and I don't know where others would be if we still have them, but I remember thinking it was a weird set of art prints for a 30-something Swedish man to own. He had never done anything with them, but didn't have any objection to me having them framed. But 5 big art prints take up a lot of space and we had never previously had a good place to display them until we decided to hang them in Karin's room.

Åke Arenhill was famous in these parts, coming from Malmö; he was an artist, set designer, film director, advertising art director, author and songwriter. In later years, he worked in media, radio and television as a producer and program host. He painted in oils and tempura, made lithographs, designed posters and playing cards, among many, many other projects.

When Karin was a few years older and we started discussing redoing her room, she was adamant that she did NOT want the "egg ladies" anymore. I didn't know what she meant until she pulled me into her room and pointed, and I had to laugh. The ovals that included the year and his signature by the foot of each print DID look like giant eggs. :D When she was around 7 or so, her room was completely made over into a red and black and silver Asian-themed extravaganza complete with two huge yin-yang Chinese dragons in red and black on one wall.

The egg lades were banished to our closet. Where they have been ever since.

Karin came home yesterday and rooted through drawers and cabinets and closets looking for stuff she could persuade me to give her for her new apartment. She got a pair of candlestick holders, some tea light holders, a couple of table runners, a framed poster, and a framed piece of embroidery that I did when I was around 12 or so. And then she said she might take the egg ladies if I didn't have any objection. I had to laugh.

"You HATED those!" I said. "I KNOW!" she laughed back. She had to ask her girlfriend but after I sent photos, and they were approved, we took them with us today as Anders was going over to help hang some lamps and other paintings. I told her she isn't allowed to get rid of them...if she decides she doesn't want them later, she has to give them back to me.

Now they're hanging along the long wall over the sofa in Karin's new place, and I can now enjoy them every time I go visit her. *happy dance* 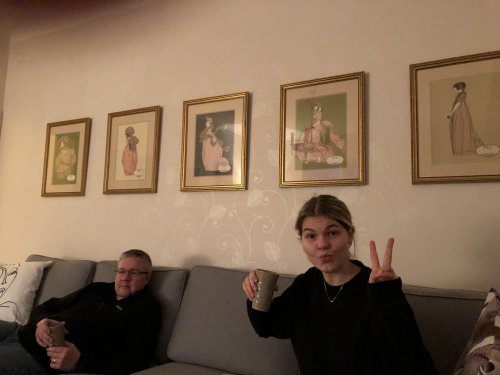