Last week started on such a high, with the anticipation of the inauguration coming like a rainbow of angel choirs singing and the sun coming up. It's been SUCH a freaking relief to look FORWARD to reading the news, checking the headlines, skimming social media. I heart everything! I care! I thumbs you up! And I cannot overstate what a relief it has been to have the former 45 silenced and to have silence not only from him but about him. He can't disappear fast enough, as far as I'm concerned.

Anders and I watched the inauguration, and I got teary-eyed several times: when Lady Gaga was singing, when Kamala Harris said "I do" to America, when Amanda OMG I LOVE HER Gorman raised the roof with her recital of the poem she wrote for the inauguration and blew everyone away, when Joe was sworn in, when the sun was shining on them, when I was listening to an articulate, positive, hope-building speech. The whole thing...what a difference a week makes. BUT. Don't go to sleep now, people. There is still so much work to do.

Anders' mom wasn't getting better, though she did manage to call us a couple of times, and both Anders and his sister went to see her. She wasn't very responsive and seemed to be getting worse. Not eating, though the staff was giving her nutrients and pain medicine. Anders came back from the last visit visibly shaken, and when we talked to the kids, we told them to prepare for the worst, but hope for the best. On Saturday, she passed away, in her sleep, at least, and we headed over to sit vigil with Anders' sister. It was so sad and so awful, and the worst part has been this absolute waste of a year, in which we couldn't be with her, we could hardly visit, we couldn't celebrate or SEE each other.

She was such a feisty lady, and such a fantastic mother and grandmother. Having to call and tell the kids was so hard, especially Martin, who is so far away and can't come home. Karin was with us at Märta's residence on Saturday. It's so unbelievable to think we won't see her again. I feel blessed to have been so welcomed and loved by her since I arrived in Sweden with Anders. She was SO happy that we chose to make our home here in Sweden, and even though I have always been torn about it, because I miss MY mom so much, it was wonderful to feel that I had a family here, too.

We don't know yet what the options are for a funeral, since the limit on gatherings is still a maximum of 8 people. Anders and his sister are meeting with the funeral home on Wednesday to make plans. They are going tomorrow to her residence to start sorting through things, and deciding what to keep and what to donate. There isn't so much this time, since we did so much of that when she moved to the home, but there is still a room full of her things to be dealt with. 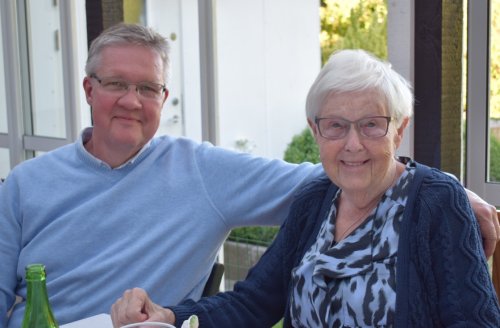