I read recently that birdwatching from your home provides a major boost to mental health. The article says, "Researchers from the University of Exeter recently found that bird watching can have a positive effect on mental health. They discovered that people who are able to watch birds from their homes have a lower risk of depression, stress, and anxiety compared to people who live in less nature dense areas with fewer birds."

We have two bird feeders set up at the corner of the deck, one that holds 2 suet balls and one that is 2-sided for sunflower seeds and a seed mix. The seed mix disappears down to the perch every day. The sunflower seeds go down much more slowly, despite the fact that there are sunflower seeds in the seed mix, too. The suet balls also disappear really fast. Sometimes, that is because the big birds come and attack the feeder until they knock it to the ground and can drag the suet balls away. I get up often and scare the "the big blacks" away, which sounds really racist... it's the crows, jackdaws, rooks and ravens. All huge and very aggressive. I don't scare the magpies away, even though they're just as big and aggressive as the crows and jackdaws, because I love magpies. They're so colorful and cheeky.

Lately, we've had a pair of wood pigeons (much bigger than regular city-style pigeons) and a bunch of mourning doves. The doves are about as big as the magpies, but they're very timid. The wood pigeons are twice their size, and they're bullies. They charge the doves repeatedly and drive them away from the area below the feeders, hopping and popping up in the air until the doves back off. We get a lot of pheasants throughout the winter, but now that people are out and about, they don't come around much. Other than the very occasional visit from a middle-spotted woodpecker or a pair of blackbirds, we mostly get the small songbirds: sparrows, tits, chickadees, finches. I have yet to see a pied wagtail (Spring's herald) this year, but they don't frequent our feeders, anyway.

I refill the feeders every couple of days and jet-wash the birdbath at the same time, before refilling it with clean water. It's gratifying to see the birds using it, and fun to see them splashing in the water during the summer months, though we stop filling the feeders by the end of April. I have friends who feed the birds year round, but they make such a huge mess with seed detritus that we only supplement them until late spring.

It's a long weekend, for the Easter holidays. We had Friday off and this coming Monday as well. Yesterday, we had Good Friday dinner, an Ek family tradition, with Anders' sister and family, and Karin, and it was a really lovely, relaxed dinner, with delicious food. Maria made a whole side of salmon baked in the oven and covered with a coating of panko, chopped dill and butter. And Anders made homemade meatballs from a blend of beef, pork and moose. YUM YUM. He was also in charge of the hard-boiled eggs and spent the morning coloring them au natural; three different batches with onionskins, blueberries and turmeric. The turmeric turns them a bright yellow, the blueberries were a purple-dusky blue, and the onionskins were a mottled brown and yellow.

It's the first year since we had kids that I haven't colored eggs myself. The only Easter decoration we have out is a bundle of birch branches with brightly-colored feathers tied to them, stuck in one of the pots out front. My friend Debbie gave them to me a week ago, or I wouldn't even have that! The feathers on birch branches is a exclusively Swedish tradition.

Today's project, since it is finally sunny again, was dealing with the garden. I cleaned up the front garden beds, filled all the pots with pansies and bought a new honeysuckle for the other side of the trellis and 2 butterfly bushes to plant in the back corner of the yard. I miscounted the first time though and missed a pot, so I didn't have enough pansies. But for my afternoon walk, I went back to the plantshop and bought three more...CURLY ONES! They're so cool. I googled them and they are called Viola Frizzle Sizzle Blue. How is that for a super cool name?! They look like this: 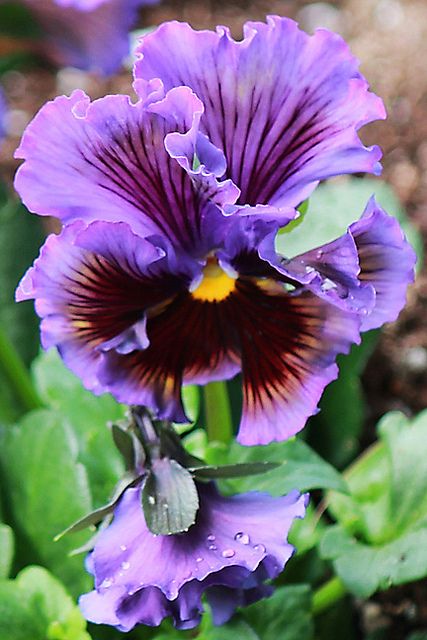 Anders is readying the seed starter pots and planting tomatoes, snap peas and soybeans. We have potatoes and carrots ready to go into the ground as soon the temperatures stay steady enough. He's also going to trim the old honeysuckle and the roses, and plant the new one I bought today as well as prepare a bed for the butterfly bushes (I hope!). I am looking forward to warmer weather and putting out the deck furniture so we can sit out back and enjoy the sunshine, when we have it.