Martin left North Carolina on Tuesday. Mom, Sarah and Bryce drove him to the airport, a couple of hours early, so that he could get his extra bag registered and make sure everything was squared away. He had gotten a rapid COVID test the day before (negative) and downloaded 2 Audible books for the trip. Everything went super smoothly and he kept us all informed by text messages at every step of the way.

When he got to London on Wednesday morning, it turned out that his flight to Copenhagen had been moved slightly and was departing about an hour later than we had originally been told. The plane coming in was also delayed, but he said the pilot must have 'stepped on the gas' because they were on time landing in Copenhagen. One of his best friends texted him and told him that since she is currently working in Copenhagen, and takes the train, she could meet him at the airport stop and help him with his bags onto the train. So, he said, his delay was for a reason since that worked out perfectly!

Except that when he was down on the platform waiting for her, the train she was on was so packed with people that she couldn't get off and he couldn't get on. So he had to sadly wave at her and make gestures to try and tell her he'd take the next one. Which was much emptier. She actually got off at the next stop in Sweden and when his train got there, she got on so they had a couple of stops before arriving in Lund.

In the meantime, I was having travel butterflies FOR him! I was so excited that my stomach was upset. I had picked up Karin and then we went and picked up sushi for everyone for dinner and we headed to the train station...early of course, because I'm chronically early. A few minutes before his train arrived, we headed up to the platform (cold! windy!) and waited as he and Claudia disembarked and started down the platform toward us. Martin was the only person with a facemask on. :)

Huge hugs all around! My other kid is home! My anxiety level, was has been extra highly ratcheted for the past couple of years, is finally down where it belongs (mostly, haha). He is thinner and his hair is longer, but he is home and I am super happy. 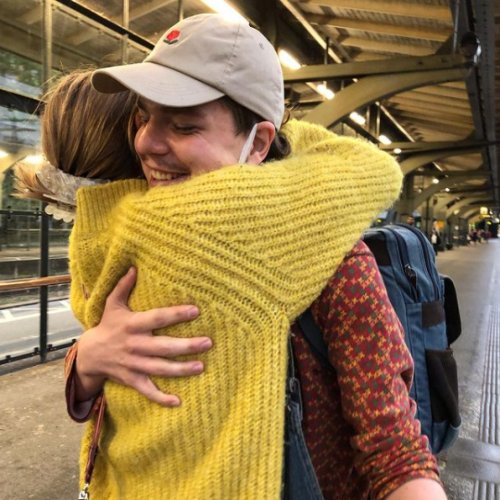 I worked from home on Thursday and took Friday off, and Martin and got up early and ran a bunch of errands for him. We went to the tax authority to get him registered back into the Swedish system, went to the bank to get a new debit card and update his info, and to the the phone service center to get him a new Swedish phone card and number. Then we stopped at the grocery store and bought some of the things he needed plus stuff for his first myskväll in Sweden in over 2 years.

He spent the evening and part of today going through his closet and bookshelf and sorting/purging all kinds of stuff. We also put his resume together in English and Swedish this afternoon and he has already applied for a job. Next week he has an appointment at the police station to replace his long-lost national ID card, and then once we get the confirmation that he's registered in the system we can get him set up for driving school and dentist/medical stuff.

He's napping now and I will wake him up in about 15 minutes so we can leave, as we are going to make a quick run to the mall again to get a couple of things we forgot yesterday (hangers, since there were none left in his closet), and then we're going to meet Karin at her apartment so Martin can see it, have dinner and then go to the movies (we're seeing Dune, which if you remember, Martin and I just read together recently).

Anders gave me the run-through on the Tesla and its operations and I took it for a test drive... so cool!! I'm working from home again through Wednesday, so the first time I will drive it for real will probably be to the office on Thursday. It's so smooth and so fast. Very fun to finally have an electric car!
Collapse